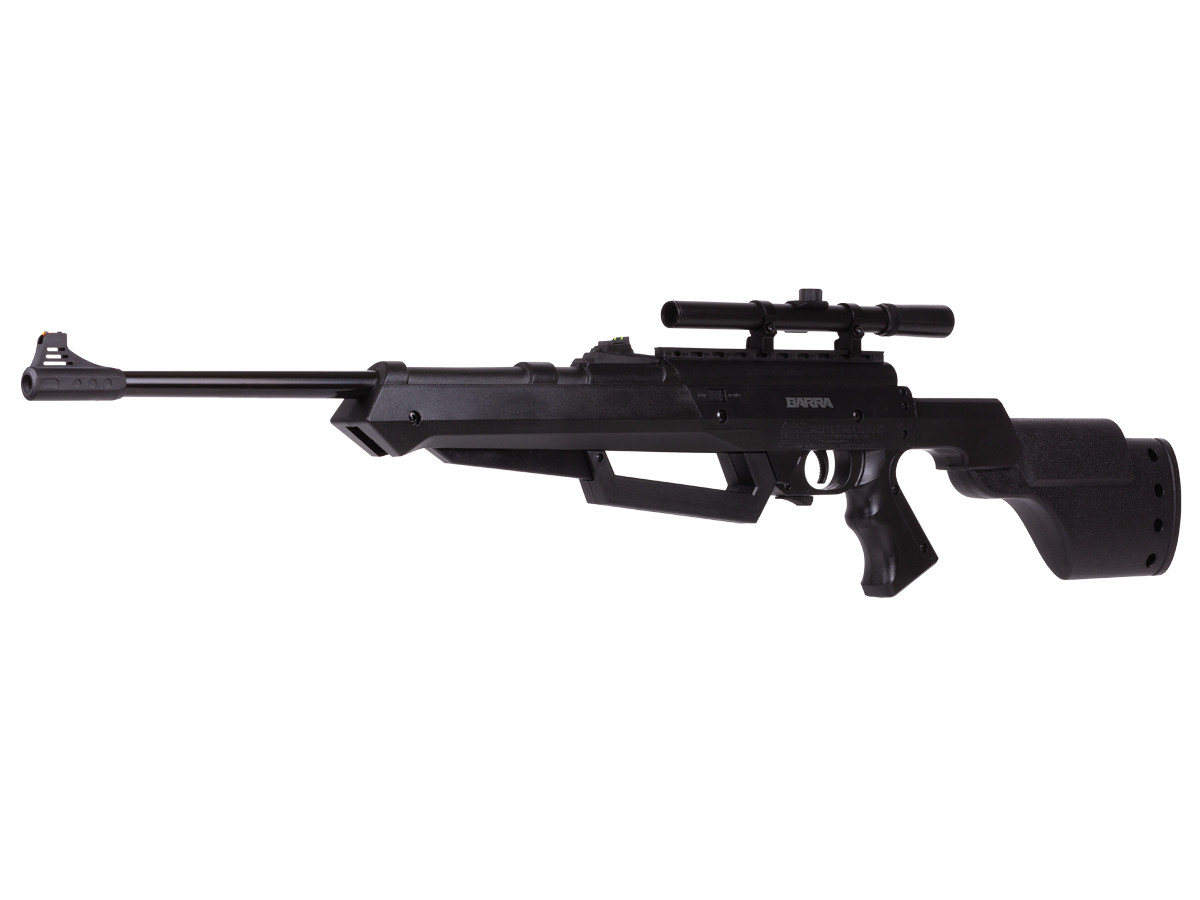 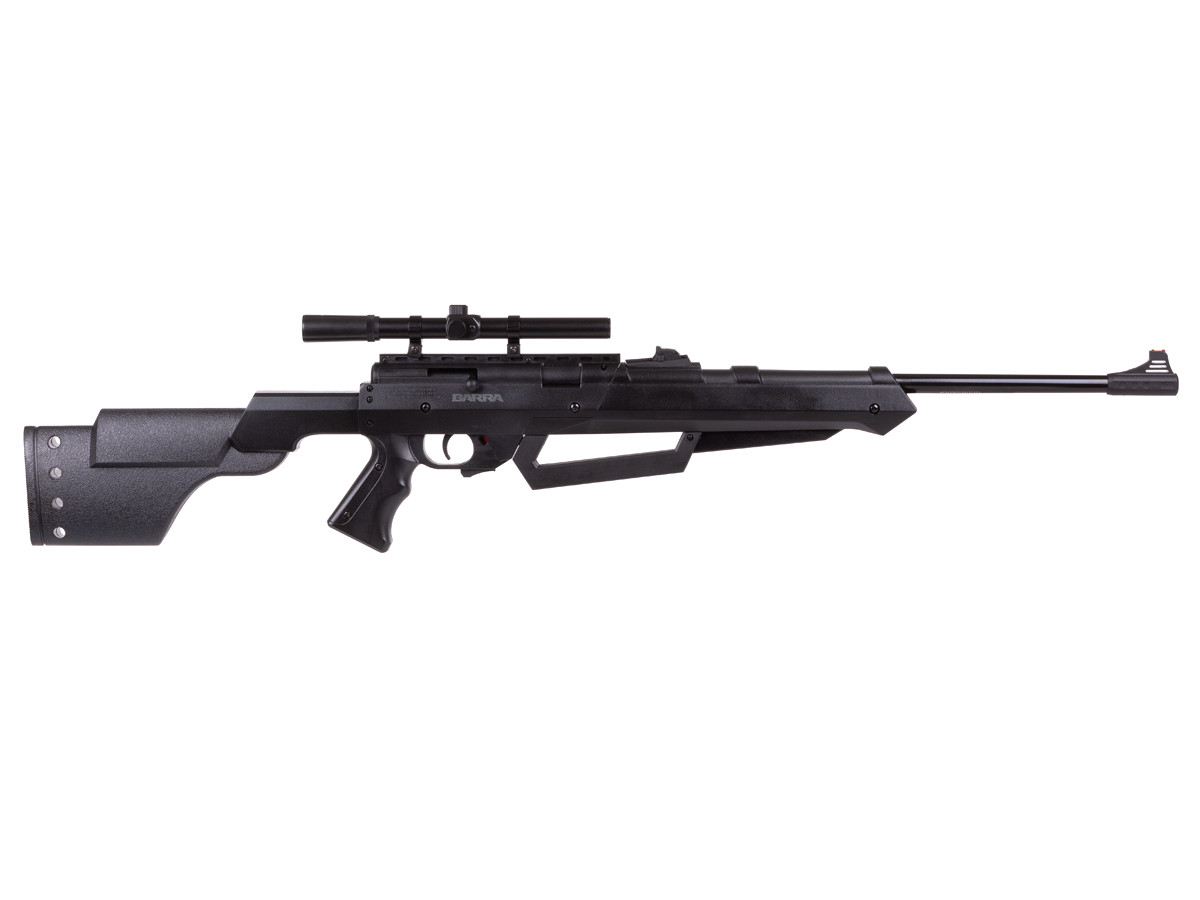 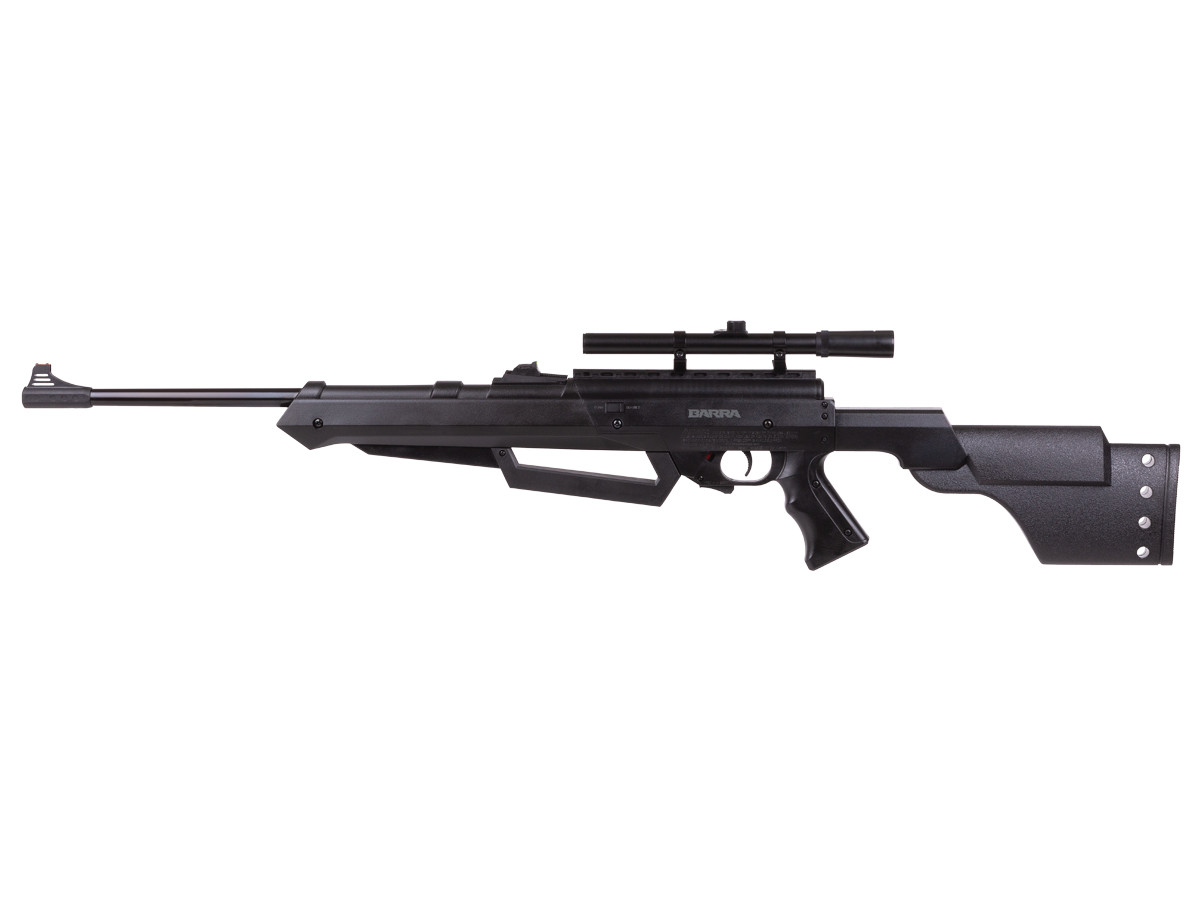 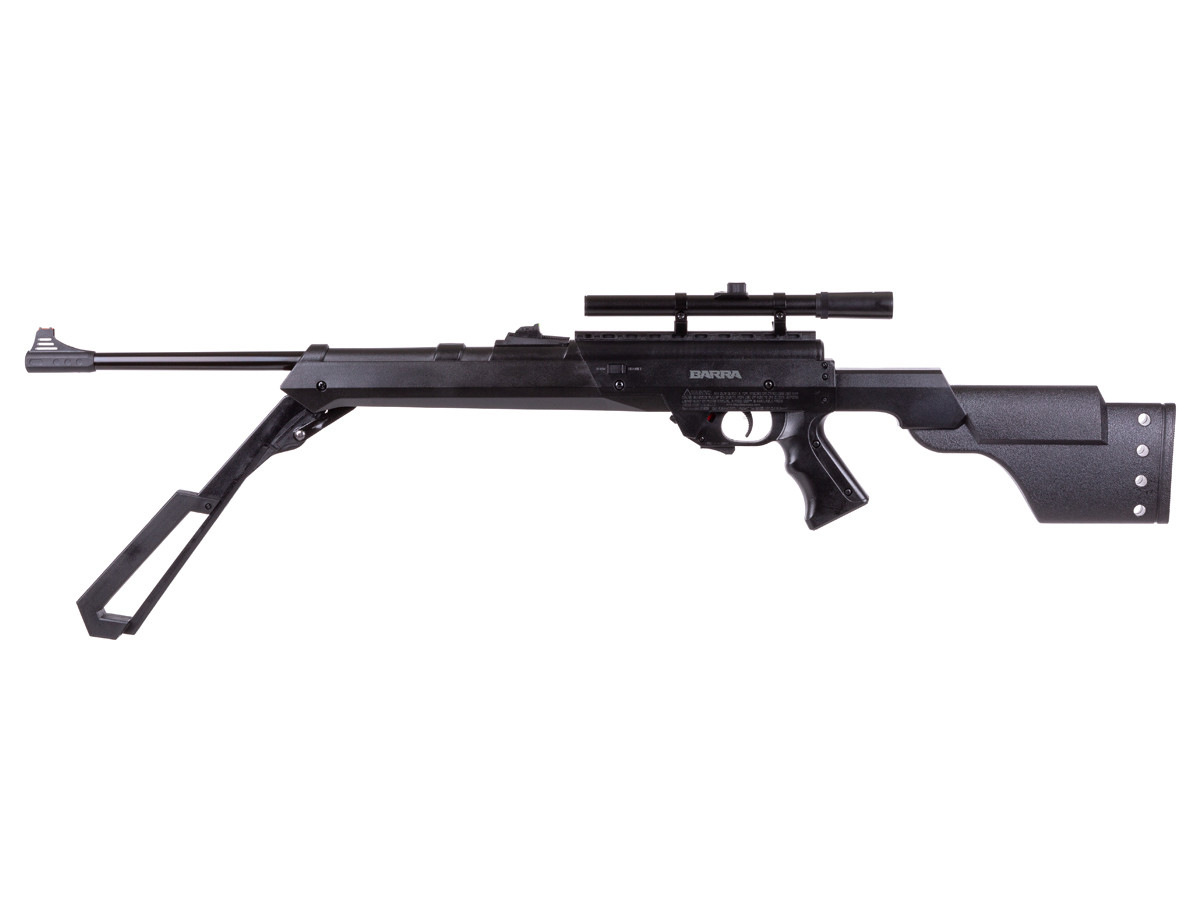 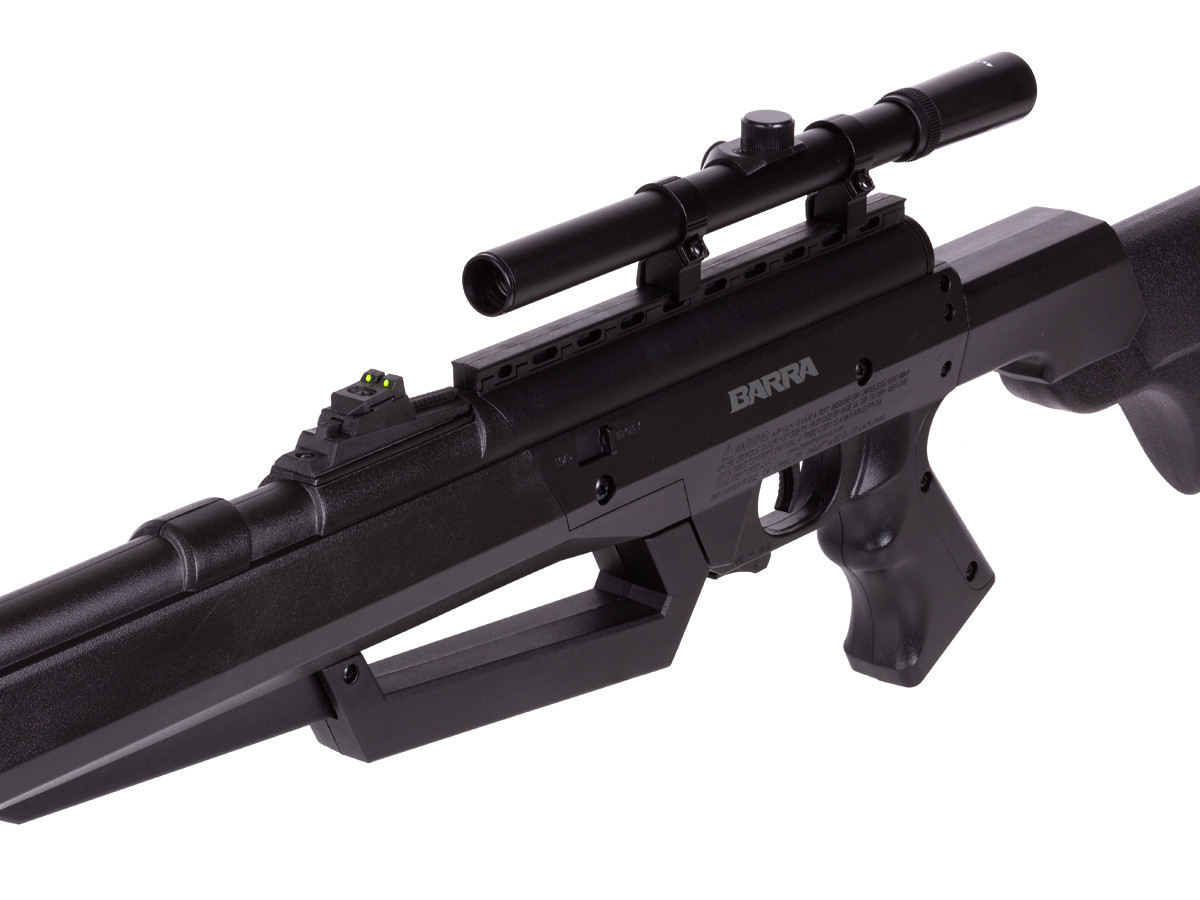 See other products by Barra

Our tech department tested this rifle for accuracy. At 10 meters, 5-shot groups were 1/8" with pellets (7.1-grain Beeman Laser) and 2" with steel BBs.

If you're looking for a multi-pump rifle that won't break the bank but still delivers hours of fun for everyone in the family, this should be on your short list. Load it with steel BBs or lead pellets -- whichever type of ammo suits you or happens to be on hand. And, if you shoot it with pellets, you're going to get surprisingly good accuracy. It's rare that a pellet gun in this price range gets such tight groups.

Multi-pumps have an advantage over every other type of air gun powerplant: You don't have to go with full power unless you want to. If you're in the mood for some easy plinking and target shooting in the backyard, just pump it up a few times. No need to put a lot of muscle power into it.


See other products by Barra

Familiar grip angle to my real pewpew things since I am a lefty and use semi-autos for real hunting of bigger game (like deer and hogs). Pump handle is easy to grab. Quite comfortable to shoot. Sights are easy to move. The accuracy is definitely there with the right scope. Once I zeroed it, I was putting 10.65gr H&N Barracuda pellets into one ragged hole smaller than a dime at 10yds (the longest range I had to shoot at the time).

This thing is LOUD! PyramidAir lists it as "medium," but that is hogwash. I was around the front of the house when one of my boys shot at a squirrel from the back yard. I heard a rather loud noise, and came around to the back of the house to see what it was and found them looking for the squirrel they had just shot at. My f-i-l's model 880 is nowhere close to this volume, yet they both shoot the same velocity. The scope is a joke. Throw it away and get a real one. Even though it is included, know that you are really paying for just the air rifle since the scope is so useless and you will end up buying one anyway. I put on a TruGlo 4X32 scope on it instead. Much better! They need to do something about the constant catch when pumping it. I understand that it's a "safety" feature, but it slows down pumping and makes a ton of noise, which scares away any animals. The loading/pumping sequence is cumbersome as well.

The trigger isn't bad. It isn't great, but then this is a $50-60 air rifle, not a high-end one. It's still a better trigger than the AR-style rifles the grip and trigger are patterned off of, and it has a definite wall (no mushy), but it could certainly be a little lighter. I will say that it is still better than the trigger on a Model 880; however, if the Model 880 came with a pistol grip stock, I would not have bothered getting this one. My f-i-l's shoots lights-out at 15yds and is quieter.

Thank you for your comment!
I very rarely do any shooting beyond about 30-40 ft, so I prefer using open sights to any scope and found these to be excellent, especially considering how inexpensive it was! When I first un-boxed it, I thought it looked very cheap and toy-like, but after going through the manual and readying the Barra for use, the more I shot it, the better I liked it! I love the open sights and after adjusting the rear-most assembly to my own preferences, I could get incredible accuracy out of it. It's every bit as powerful as any other comparably priced pumper I have (Winchester 1977XS, Daisy 880, Crosman 1000/2100) and more powerful than the rest, so eventually I came to really enjoy my Sportsman 900. It's light and has a comfortable grip so it handles very nicely, pumps easily (after breaking in), hits as hard as my other .17 pumpers and shoots with exceptional accuracy -- what's not to like? Well, not its toy-like appearance, but I just can't ignore what a great shooter it turned out to be.
Add comment to this review
June 10, 2021
By Coty

The scope is a joke unless you are a young new shooter so I gave it to my son. I will have to mount it on his Pumpmaster 760.

I purchased mine at my local Walmart for $50.00 and 6 months later, it was on clearance for $25.00. I purchased it again and when the pumpmaster is outgrown, I will give it to him.

Very accurate and quite rifle

The loading of pellets is a little difficult. Need a ramp system.

Great rifle for the money