The November podcast has been posted.

Before we begin, my buddy, Randy Mitchell, who was also the outlaw, Dakota, from Frontier Village (an amusement park in San Jose, California, from 1961-1980) sent me a photo from over 40 years ago. I was Casey Jones, the engineer who ran the railroad at the Village, and Dakota had put an obstruction across the tracks out in the badlands. When I stopped the train, he jumped me at gunpoint and forced me to clear the rails. Then, he stole my boots and drove the train back to the station himself. How time flies! 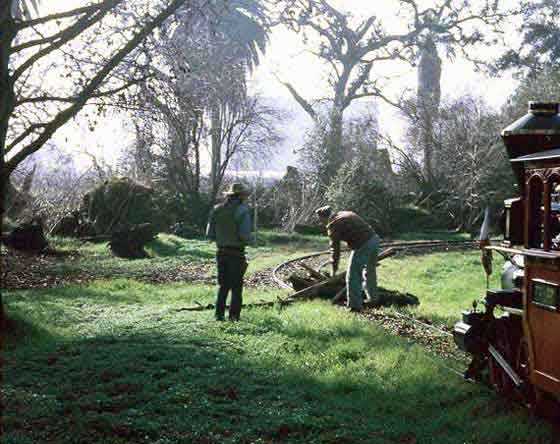 Dakota forced me to clear the obstruction, then stole my boots and drove the train back to the station himself. I had to walk back!

Now, on to today’s report. Well, well. How the tide turns when you go to an airgun show! I went to Roanoke hoping to score an FWB 124 to tune and instead I picked up one to tune for somebody else. That’s usually a good thing, because when I tune for other folks I do a better job. I’m like the cobbler whose children are barefoot.

You’ll remember from Friday that this rifle is Mark Taylor’s, and I gave you an idea of how it performed. The cocking was too hard, plus there was a scraping or grinding feel to it. Well, once I got the guts out I found out what that was and why it happened. But, I’m getting ahead of myself.

The first comment I’ll make is that Mark’s rifle hasn’t been apart many times. The mainspring I removed looked like a 124 mainspring, except that it had 39 coils — and a standard spring I have has only 35. So, the spring I removed was much longer than standard. At least I think it’s longer. Heck, it’s been so many years since I tuned a 124 that I doubt I know anything for sure anymore.

Looking through the cocking slot before disassembly, you can see that the mainspring has been coated with moly grease.

The second comment is that Mark’s rifle had the strangest lubrication I’ve ever seen in any spring rifle, and I include my older San Anselmo rifle in that observation. My gun was tuned back in the day when it was standard practice to use an entire jar of Beeman’s moly grease on the mainspring of a 124. When I took that gun apart the first time, I was scraping grease from everywhere! Had I known how full it was, I could have called Mike Rowe and gotten him to put it on his Dirty Jobs TV show.

In contrast, Mark’s rifle was almost dry inside! Only the mainspring was coated with moly, and it looked like a smear of lithium grease might have been applied to one spot on the back of the piston. As a result, the piston was touching the top of the spring tube when the gun was cocked and had galled (made shiny by removing a small amount of metal) a large area that wasn’t too deep. It wasn’t serious, but it also was never going to get any better. 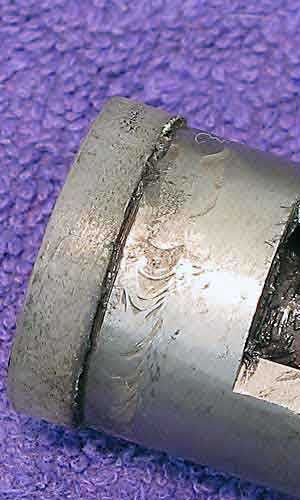 This is how the piston looked immediately after removing it from the gun. There’s no lube on the seal! 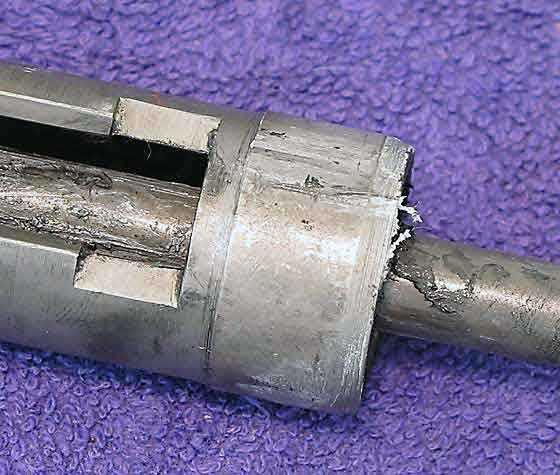 This is the back end of the piston, called the skirt. As you can see, it has next to no lubrication. 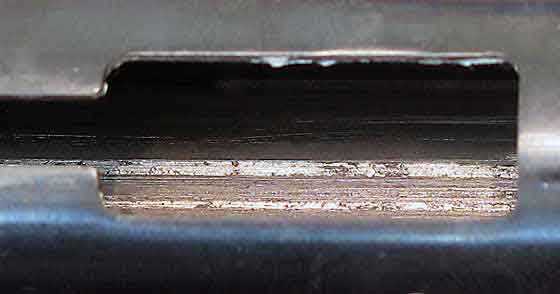 The scraping, grinding feel came from this area. Those two bright lines are galled metal, where the piston skirt scraped against the inside of the spring tube. The damage is minor and correctible with the proper lubrication.

I discovered this lack of lube when I cleaned the inside of the spring tube. It was practically dry and grease-free in there. If I had tuned it, there would have been a lot of moly burnished into the metal and the cleaning patches would have come out black instead of white.

Using moly grease on the mainspring isn’t the best thing when you want a smooth shot cycle. That’s where Maccari’s Black Tar comes into play. A dry piston isn’t the right thing for this gun, as evidenced by the galled metal. I lubed the front and rear of the heavy 124 piston with moly grease. Gene Salvino, Pyramyd Air’s tech manager, recommends using lithium grease on their piston seal, but I used moly on this one because of the galled metal.

The piston seal that was in the rifle looked to be in fine shape. Since this was supposed to be a test of the new Pyramyd Air seal, I removed it anyway. I’ve never seen another one like it and have no idea where it came from.

I also noted that the baseblock bearings weren’t lubricated with much of anything, which might have added to the cocking effort. Also, the barrel pivot pin was dry. I spread moly grease on both the bearings and the pivot bolt before installing them in the rifle again.

I selected an old Maccari Deluxe tune kit for the rifle. This kit drops in, but is made so perfectly that the mainspring goes on the spring guide like it was nailed on. That’s tuner’s slang for a very tight fit. The spring diameter expands when it’s compressed lengthwise, so the fit isn’t as tight as it seems when you install it. There was also a Delrin spacer for the spring guide that put a little more tension on the spring.

This is how to lubricate a 124 piston correctly. Both the front and rear of the piston can contact the other metal surfaces inside the gun. The center of the piston is smaller and cannot touch anything. Besides this, I also burnished moly inside the spring tube before installing the piston. 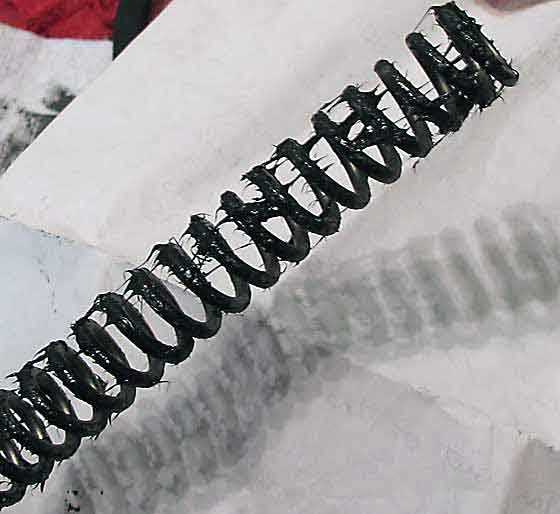 This is how I “buttered” the mainspring with Maccari’s Black Tar mainspring dampening compound.

On to shooting
The proof is in the shooting, and the first time I cocked the assembled rifle it worked as it should, which doesn’t always happen. I noted that the cocking effort didn’t seem to have decreased much, but the cocking cycle was now as smooth as it should be. Then, I shot the rifle.

Wow! What a beautiful tune this is. Not only is all vibration gone, but the forward recoil I had noticed disappeared, as well. The gun just sort of pulses when it’s shot.

I then measured the cocking effort and was stunned to find it had increased a pound to 28 lbs. of effort. Personally, I think it’s too heavy for a 124, but the smooth shot cycle is too nice to ignore. Let’s see what is does over the chronograph.

Crosman Premier lites
The 7.9-grain Crosman Premiers averaged 744 f.p.s. with this tune. The spread ranged from 736 to 750 f.p.s. That’s a little tighter than the original tune, and much smoother. The average muzzle energy was 9.71 foot-pounds.

RWS Hobbys
RWS Hobby pellets averaged 784 f.p.s. The spread went from 776 to 793 f.p.s. Again, a slightly tighter spread than before. The average muzzle energy was 9.56 foot-pounds, and a super-smooth shot cycle.

JSB Exact 8.4 grains
JSB 8.4-grain Exact domed pellets averaged 723 f.p.s., a surprisingly low figure. They ranged from 713 to 730 f.p.s. and produced an average muzzle energy of 9.75 foot-pounds. They shot just as smooth as the other two pellets.

What to do next?
This is a toughie. The rifle is cocking and shooting extremely smooth right now, but the cocking effort is a bit high. Mark, the owner, says he doesn’t mind that, as long as the gun shoots smooth, which it definitely does. I’m at the point of a decision that I’m going to let Mark make. I feel certain that the Black Tar on the mainspring is what’s slowing down the gun just a bit. As tight as the mainspring fits, it probably isn’t necessary. Still, the gun does shoot very smoothly, and almost all of the forward recoil seems to be gone, as well. From a shooting standpoint, this is a fine tune. I’ll let Mark decide.

If he wants more power for the cocking effort, I would remove the Black Tar and lube the mainspring with moly grease. But, if he wants a super smooth shot cycle, we have that right now.