Today, we’ll look at the velocity and power of the Cometa Lynx V10 precharged air rifle. Blog reader /Dave has asked if I will please post the price of the gun in the first report because he reads the blog on his telephone, where navigation is difficult. I didn’t do that in part 1…but it lists for $950 at PyramydAir.com.

This will be a learning day, because the Lynx has a regulator. A regulator controls the air pressure and volume that’s available to the firing valve, so each shot gets almost exactly the same volume of air. That has two benefits — one obvious and the other subtle.

The obvious benefit is greater shot-to-shot consistency. On some air rifles, this can be as small as one or two foot-seconds across the entire usable fill, but that usually happens with lower-powered guns. Higher-powered guns may vary more, but they’ll still be relatively close.

While some unregulated guns get 10-shot strings with very close velocities — when you look at the entire fill, they can vary by hundreds of f.p.s. So, the second benefit is that you’ll get the same velocity throughout the entire part of the fill where the regulator is “on.” We saw that most recently when I shot the Talon SS with the Micro-Meter tank.

Falling off the reg
When the pressure remaining in the reservoir is not as great as the regulator’s adjusted pressure, the regulator stops working. We use the term “falling off the reg” when this happens. It’s very sudden and can be spotted immediately by a shooter with experience. From that shot on, all shots will diminish in power, though they may still retain enough power to be useful for quite a few more shots.

I’m not just interested in the power of the Lynx, but also the point it falls off the reg, as that determines the maximum number of useful shots you get from a fill. I’m also interested in how closely the onboard pressure gauge correlates with the regulator. In other words: Can I trust the needle on the gauge?

I selected three pellets to test today, because they’re the three I’ll choose for the accuracy test. I may use one or two other pellets later on, but these three will give us a good idea of the Lynx’s performance.

JSB Exact 15.9 grain
The Lynx I’m testing is in .22 caliber, so I selected the JSB Exact 15.9-grain pellet to test first. I did so because this has proven to be the most accurate pellet in the majority of PCPs I’ve tested in .22 caliber. The gun was filled to 3,000 psi and shooting commenced. 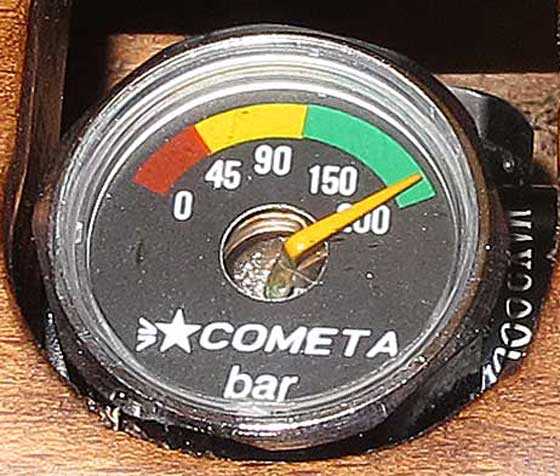 The gauge after two shots on a full fill.

The first shot went 923 f.p.s. After that, nothing went faster than 916 f.p.s. with this pellet. That first shot was needed to wake up the reg and the valve. I disregarded it for this test, except that I counted it in the total number 0f shots per fill. It was probably unnecessary to disregard it, as the velocity didn’t change that much; but with other guns I’ve tested, it does. This has become a habit for me.

The first string of 10 shots (discounting the very first shot) averaged 912 f.p.s. The string ranged from a low of 906 f.p.s. to a high of 916 f.p.s., so 10 foot-seconds was the total spread. At the average velocity, this pellet generated 29.37 foot-pounds of energy at the muzzle.

Crosman Premier
Next up were 14.3-grain Crosman Premiers. They averaged 947 f.p.s. and had a spread from 939 to 953 f.p.s. That’s a 14 f.p.s. spread. At the average velocity, these pellets generated 28.48 foot-pounds, or just slightly less than the heavier JSBs. That’s what you would expect in a PCP, as they usually become more efficient with heavier pellets.

I expect Premiers to be accurate in the Lynx, but probably not quite as good as the JSBs. On the other hand, there’s another pellet that may challenge the JSB for the top spot. That pellet is the Beeman Kodiak.

Beeman Kodiak
Beeman Kodiak pellets are made by H&N. They’ve varied in weight over the past several years, so I weighed the pellets from the tin I was using in this test. These pellets averaged 21.1 grains. They averaged 825 f.p.s. in the Lynx with a spread that went from 821 to 829 f.p.s. They varied by only 8 foot-seconds across the entire string. At the average muzzle velocity, they produced 30.9 foot-pounds of energy. This may be the pellet to watch for accuracy.

More air!
After the Kodiak string, the rifle had fired a total of 31 shots since being filled. The needle was still in the green zone, so I ran another 10 JSB Exacts through the chronograph. This time, the average was 908 f.p.s., with a spread from 905 to 913 f.p.s. The rifle was still on the reg after 41 shots.

The needle on the gauge was now down close to the bottom edge of the green sector. But I kept on shooting to see what the total shot count would be before the gun fell off the reg. 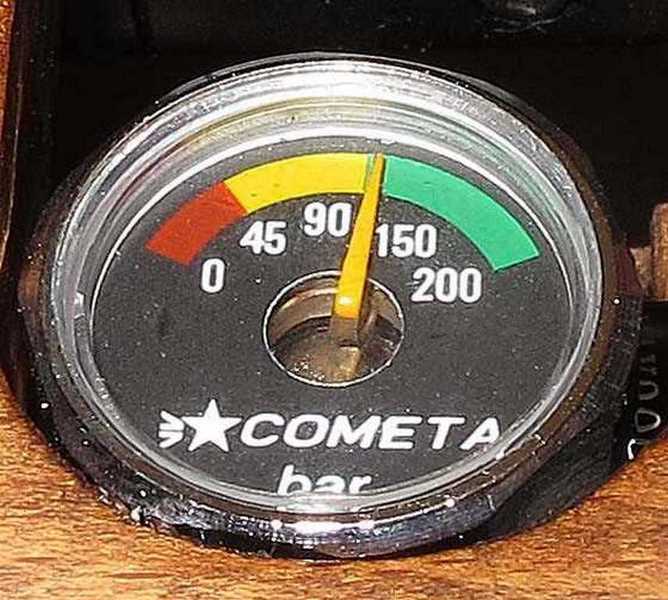 The gauge after 41 shots on a fill. There are still some good shots, according to the needle.

The next shots registered as follows. 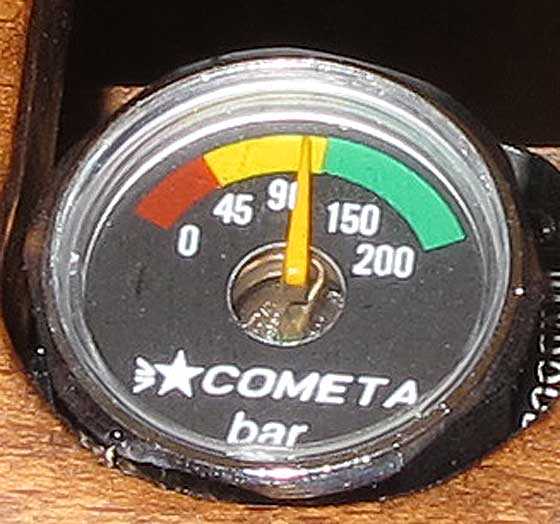 The gauge, three shots after the gun fell off the reg. The gauge on the test rifle is quite and can be trusted.

The Lynx I’m testing gets about 50 good shots per fill. Those shots are all around the 30 foot-pound range when medium-heavy pellets are used.

Discharge sound
The Lynx is very quiet for its power. This is a rifle that won’t bother most neighbors, unless they are laying in wait for you.

Trigger
The trigger is different because the first-stage pull has a lot of the weight in it. It takes some getting used to the rifle to feel stage two, but once you do it’s very positive. Stage two is totally free from creep, and there isn’t any travel after the release.

The first stage takes 2 lbs., 4 oz., then stage two breaks at 3 lbs., 5 oz. as the adjustment is set from the factory. I fiddled with the two screws that seem to affect the adjustment, but I didn’t get anywhere. One of them simply loosened the push-button safety, while the other introduced a third stage to the pull without affecting anything else. But the trigger is already very nice, so this wasn’t a problem.

Accuracy is next, and I’ve decided to divide it into two parts. First, I’ll sight-in at 25 yards and find the best pellet. Then, I’ll go out to 50 yards and see what this rifle can do. This should be an interesting test. 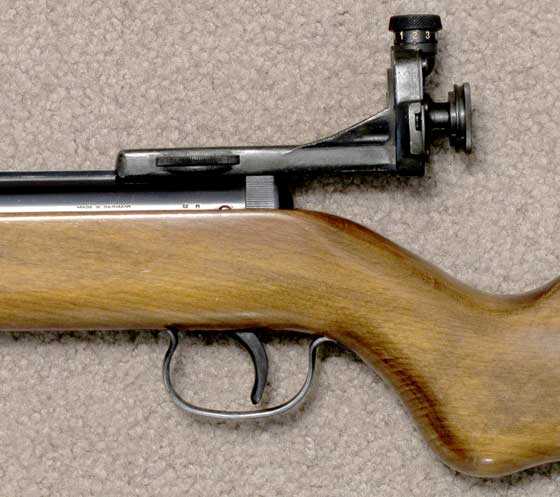