Today is our second look at the .22-caliber Benjamin Marauder with synthetic stock. We have a new log reader who goes by the handle AirrifleRatHunter, and he just bought a synthetic Marauder and it’s his first PCP, so I want to help him with his rifle.

Baffled?
ARH said his rifle wasn’t as accurate as he thought it should be. We found that he was using substandard pellets and corrected that, but I also mentioned to him that the baffles inside the shroud could be involved. He asked me what baffles are, so I’m now showing them to everyone. The test Marauder has 7 Delrin washers (the baffles) that are shaped to strip away the compressed air behind the pellet once it leaves the rifle’s muzzle, which is buried deep within the shroud. I’ve laid out these parts for you to see how they work. If the pellet were to touch one of these baffles as it passes through, it would destroy accuracy.

Here you see all the baffles that are held inside the shroud under spring tension, so they don’t rattle around.

Looking at a single baffle shows that the compressed air that’s behind the pellet gets stripped to the sides by the shape of the baffle (on the left) as the pellet passes through its center. This happens 7 times in succession before the pellet leaves the gun. The end cap that pushes the baffles against the coiled spring at the back has an o-ring to keep the air from escaping around its threads.

One other accuracy tip is to ensure that the shroud is not touching the forward barrel band on any side. Mine was touching on one side when I got the rifle, so I loosened the 2 set screws on the bottom of the band and repositioned it. 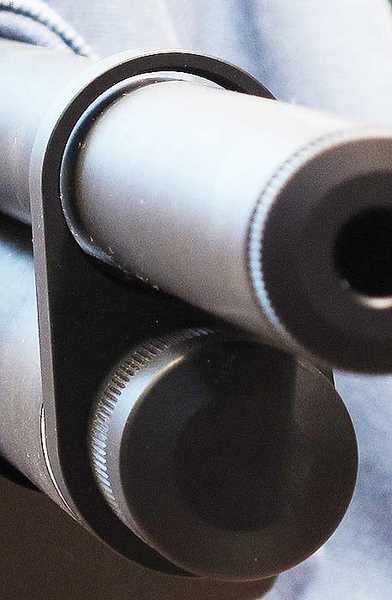 I have repositioned the front barrel band so it clears the barrel shroud around its entire circumference.

Today is setup day, where I will adjust the rifle to suit myself. The first thing I did was select a scope and mounts. Marauders have a low receiver, which means you need to select a higher scope mount if the objective bell of your scope is a large one. I chose a Leapers UTG 4-16X50 scope with illuminated reticle, but mine is an older model than the one I linked to. Nevertheless, it’s a big scope with a large objective bell that needs height to clear the barrel shroud. 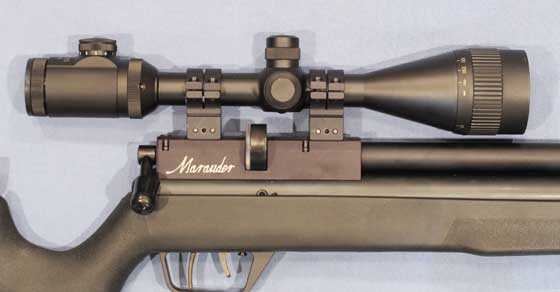 See how close the objective lens comes to the barrel shroud — despite my using high mounts? Also note that the magazine needs clearance, so the scope mount must be 2-piece.

You have to either use a 2-piece mount or a cantilever 1-piece mount that will clear the magazine sticking up above the receiver, so keep that in mind when looking at mounts. I chose BKL one-inch mounts with double straps that are high enough for the gun and scope combination. The double straps mean that you don’t need to worry about the torque sequence when you tighten the screws in the scope caps because each strap is independent. 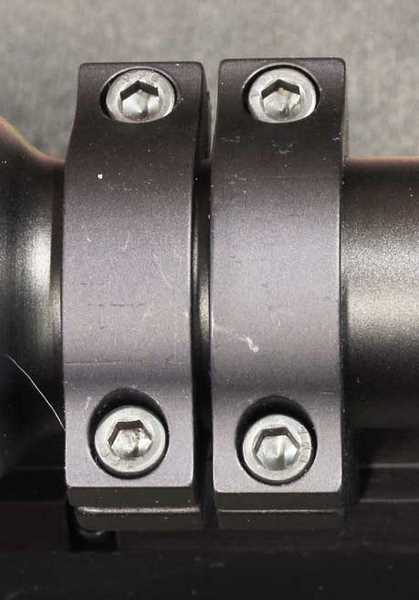 These clever BKL scope caps relieve you of the need to follow a torque procedure when tightening the cap screws.

Adjust the cheekpiece
Usually, I have to just adapt to whatever gun I’m testing because most of them don’t have any ergonomic features. But the new Marauder synthetic stock does have an adjustable cheekpiece. I was able to raise it up so my eye in in line with the scope’s exit pupil when I shoulder the rifle normally. What a convenience that is!

The new trigger
The Marauder’s trigger has been moved back in the receiver by about one-half inch, which brings the blade closer to the pistol grip. The result is a nicer feeling when you hold the rifle because your hand doesn’t have to stretch to reach the trigger. I never noticed it until I shouldered the new rifle the first time, but it certainly feels much better now.

Moving the trigger back meant that several internal trigger parts had to be redesigned. In essence, this trigger is the same one that’s always been on the Marauder, but there are small differences inside. So, the next thing I did was adjust the trigger.

To properly adjust the trigger, you remove the action from the stock. It’s only necessary to remove one stock screw for this, and the action comes right out.

As the rifle came from the box it had a heavy first stage pull of 2 lbs., 6 oz. This can be reduced by adjusting a screw counterclockwise to take tension off the trigger return spring. When I backed the screw out entirely so no spring tension remained, the first-stage pull dropped to just under 11 oz., so there’s another spring inside the trigger group that also helps return the trigger blade.

The large round screw at the left adjusts the trigger-pull weight. Behind the trigger blade the two small screws adjust the first- and second-stage pull length. And the screw behind those 2 allows for slight repositioning of the trigger blade.

I put the adjustment screw back in the hole and tightened it just enough to keep it from falling out. That raised the first-stage pull to just over 14 oz., which is fine for a sporting rifle; but I must note that it’s heavier than the triggers in the other 2 Marauders I’ve tested. They both break at 11 oz., and this one has a first-stage pull greater than that.

Next, I adjusted the first-stage pull a little shorter, and the second-stage pull to start sooner. Those were 2 separate adjustments; but each affects the other, so the manual tells you to do them together. The owner’s manual also warns you that these screws adjust the amount of sear contact, so go slow and be careful to not get the trigger to the point that it won’t hold the sear or will only hold it dangerously close to firing. After making these adjustments, I assembled the action in the stock once more and cocked the rifle. Then, I bumped it hard from several directions, and the sear did not slip off and fire.

Before the adjustment, the rifle fired at 3 lbs., 4 oz. That’s pretty good for an air rifle trigger, given the lawyerly influences in companies these days; but a Marauder is not an average air rifle. After adjustment, it fired at 1 lb., 7 oz. but still had a bit of creep in stage 2, so I adjusted the stage-2 screw one last time. This time, I didn’t take the action out of the stock. The small Allen wrench used on these 2 screws (a .050-inch wrench is used for both stage-1 and stage-2 screws) is small enough to reach through the triggerguard and fit into the socket of the screw.

The final adjustment took another half-ounce off the pull and eliminated most of the creep. I wouldn’t call this trigger glass-crisp…but the way it’s adjusted now, it’s quite good!

Now the rifle is set up for me. Next, I’ll shoot it for velocity and decide whether to leave the fill limit at the factory-set 2,500 psi or increase it for more shots. And I may adjust the velocity, depending on what I find.