This report is an emotional one for me. The last time I tried to report on the .25-caliber Benjamin Marauder, I became very ill and it took me two years to complete the test. In fact, I never did complete the test myself because I was in the hospital part of the time. My buddy, Mac, drove from his home in Maryland to Texas to test airguns for me so he could bank a lot of data and pictures that allowed me to write my blogs from a hospital bed. Mac is now gone, and I’m starting all over again with this rifle.

I’m revisiting the .25-caliber Marauder because I never really got to test it properly the first time. Also because having tested the .177 Marauder, I felt this big gun needed to be reported at the same time. You see, Marauders are good sellers at Pyramyd Air, and several blog readers asked for this specific report.

There’s one more reason for testing this particular Marauder. It’s an entirely different rifle than the .177 we’ve been testing. Yes, all the controls work the same on both rifles and the external dimensions are the same, but a .25-caliber pellet changes the very nature of the rifle in the same way that a one-ton pickup truck differs from a compact truck from the same manufacturer. The .25 Marauder is a BIG air rifle! Big in terms of the magazine and the hole at the end of the barrel. So, this isn’t the quiet little sniper rifle we’ve come to know. This is a hunting air rifle.

I linked to the recent tests of the .177 Marauder simply because I won’t be covering all of the same ground here that I already covered there. This report will cover new ground.

The lauan stock
We are fortunate to have a test rifle with the much-maligned lauan wood stock. It may be made from lauan…I don’t know, but I’ve read so many bad remarks about this stock that I was shocked to realize that this test rifle has one. Shocked because it isn’t bad at all! It has a nice plain grain. It feels lighter than the beech stock on the earlier .177-caliber Marauder we’ve been looking at, and it’s shaped just as nicely. The checkered areas have grown smaller on the new stock, but the cheekpiece still rolls to both sides of the butt, making this an almost fully ambidextrous rifle. Only the location of the bolt handle, which cannot be changed, favors right-handers over southpaws.

By the way, another name for lauan wood is Philippine mahogany. I’ve seen this wood used in furniture, and it doesn’t receive such a bad rap. It’s a hardwood, but it grows fast enough to be a renewable source of wood for many markets, including plywood products. I think the bad reputation comes from the fact that lauan is often used to skin low-quality hollow-core interior doors. People see that these doors can’t stand up to outside environments, and they think it’s because of the wood used in them. But lauan is not especially weak when used by itself.

I do find this wood to be thirstier than beech when I rubbed the stock down with Ballistol. So far, it’s soaking into the pores quite fast, leaving a dry, matte surface behind.

The test rifle has no scope mounted, so I’m taking the opportunity to install a new UTG 6-24X56 AO Accushot SWAT scope that Leapers sent for me to test. I’ll give you a separate report on the scope, so I’ll just mention it for now. The scope comes with 30mm rings that have Weaver bases, and the Marauder scope rail is for 11mm bases; fortunately, I also have a set of UTG Weaver-to-11mm or 3/8″ dovetail adapters that allow Weaver rings to fit on 11mm rails, so these rings will fit.

Power and setup
I can tell you right now that this Marauder rifle is shooting in the 38-40 foot-pound region, so it’s a proper thumper! I know that from the last set of tests Mac ran in 2010. But I plan to run the tests all over, just as if I never tested the gun at all. I probably won’t tune the rifle to shoot with less power or at a lower maximum fill pressure because we’ve already seen how that goes in the test of the .177 Marauder. I do plan to adjust the trigger to be as nice as the one on the .177 rifle, but I doubt I’ll say much about that because it’s ground we’ve already covered.

The rifle is set up to work with slightly less than 3,000 psi right now, and I don’t see changing that. I’ll confirm what the max pressure is, and only if it’s several hundred pounds below 3,000 will I make any adjustments.

Accuracy
The accuracy test is where I plan on spending most of my time. There are so few accurate .25-caliber pellets, so I’ll do some comparison testing with several pellets at 25 yards. The best pellets from that test will make it to the 50-yard test. I’ll modify my 25-yard test to include more pellets than I normally shoot because the world of .25-caliber pellets is so small that we really can’t afford to overlook a possible good one.

.22 caliber Marauder
While I test the .25-caliber rifle, I’m awaiting the arrival of the new Marauder with synthetic stock. I hope to get one of those in .22 caliber, which will give me my first chance to test this rifle in that caliber, as well as testing the new configuration stock and the altered trigger.

The rifle
The rifle I’m now testing is 3 years old and was made in .25 caliber from the beginning. The magazine is therefore much thicker than one made for a .22-caliber or .177-caliber rifle. Instead of holding 10 pellets like the 2 smaller calibers, the .25 caliber magazine holds 8.

The rifle’s remaining dimensions and specifications are the same as those of the smaller-caliber Marauders. The overall weight will vary with the density of the wood in the stock, but this new wood seems to be less dense than what was used in the past.

So, sit back and relax. There’s a lot more Marauder coming your way! 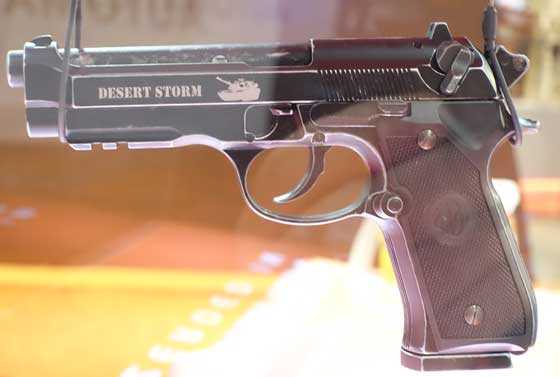