I’m diving right into the Mauser 300SL. Today will be velocity day, plus I will try to treat the mainspring(s) with Tune in a Tube. Lots to do, so let’s get started.

If I don’t test the velocity of the rifle before trying to tune it I know many readers will be upset, but I’m only going to test a single pellet. That will give us a before/after comparison with Tune in a Tube. However, the way this rifle vibrates, there is no way I’m not going to try to calm it down. It’s supposed to be a target rifle anyway, so raw velocity is not important.

If Tune in a Tube does not do the trick, as reader Dom predicts (because of the design of the powerplant), then I may try to tune it further — either with a trick he mentioned or some other way.

I shot the RWS Hobby pellet for the velocity test before lubrication and the average was 576 f.p.s. That is right at the low end of where a target rifle should shoot. The velocity spread went from a low of 566 to as high of 580 — so 14 f.p.s. That’s not bad at all!

The vibration was slow and not painful, but it was distracting. I couldn’t shoot a gun that vibrates this much for very long! And now I had a starting velocity to compare to.

I removed the stock to see the state of lubrication as the gun came to me. The mainspring(s) was/were dry. I also got a look at the trigger assembly that is welded to the spring tube. It appears straightforward and I believe I now know what each of the two adjustment screws does. Dom tells me there are two springs in the gun as well as a leather piston seal. So, not only do I need to lube the mainspring — the piston seal also needs some oil. That should increase the velocity, if anything.

The mainspring and piston were dry.

When I took the action out of the stock I thought about the newer readers who have no experience doing things like this. I wanted to give them a little tip. Usually (but not always) the triggerguard is attached to the stock by a wood screw and attached to the action by a longer bolt. The head of the longer bolt is almost always larger because that bolt gets tightened more than the smaller wood screw needs to be. You can leave the wood screw in the triggerguard when disassembling the rifle 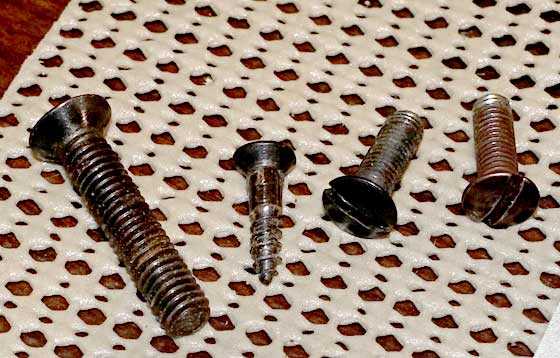 I saw a clue to the build quality when the action was out of the stock. The underlever is attached by a bolt that has a locking screw that fits into notches cut into the bolt head. It’s a 1930s design, and it’s also the kind of build quality that many airgunners long for. 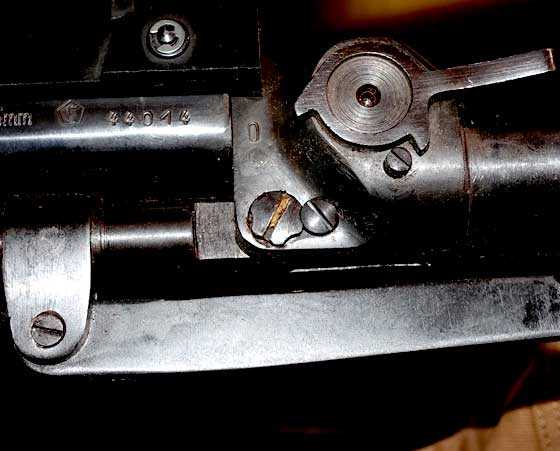 The underlever pivots on a bolt that’s locked in place by a second screw.

All is not perfect however. The action rocks fore and aft when it lies in the stock. That’s proof that the bedding (inletting) is not correct. And it can be a deterrent to accuracy. In fact, it almost always is, because as the bedding screws change tension the action moves in the stock.

Once the gun was apart I saw places to apply Tune in a Tube. I put in a lot, because it has to spread all around to all the parts on the inside. Then I put the stock back on and fired the first shot. Dom — you really need to get some of this stuff, because it calmed the gun down on the very first shot!

There was still a trace of vibration at this point, but I would say 80 percent had gone. The rifle had  passed from being offensive to tolerable. In fact I find myself now criticizing the trigger because the vibration is out of the way.

I remembered the piston seal too, and filled the loading tap with silicone chamber oil, then rotated it closed and stood the rifle on its butt for a hour. The oil runs straight back to the piston seal this way and should rejuvenate the leather. If there is a velocity increase, it will be due to the oil and not to the Tune in a Tube grease.

After the Tune in a Tube grease and pistol seal oil were applied, I went back and retested the rifle with Hobby pellets. This time they averaged 593 f.p.s., with a spread from 586 to 599 f.p.s. The average increased by 17 f.p.s. and the spread was 13 f.p.s., or 1 f.p.s. less than before. I attribute all the gain to oiling the piston seal. I have to add that the rifle became increasingly smoother as I shot it, so the grease is still spreading around. Remember the Tune in a Tube directions say to shoot the gun 30-50 times to distribute the grease. I have not done that yet. You are watching it as it breaks in — shot-by-shot. Now, let’s try a couple target pellets.

Qiang Yuan Training pellets are wadcutters that weigh 8.2 grains. They can be remarkably accurate in some target spring guns. In the Mauser 300SL they averaged 534 f.p.s. The range went from a low of 528 f.p.s. to a high of 544 f.p.s. That’s a 16 f.p.s. spread. The rifle was remarkably smooth with them.

Next, I tried some Sig Sauer Match Ballistic Alloy pellets. These are surprisingly accurate in many lower-powered airguns. In the 300SL they averaged 681 f.p.s. and the velocity spread went from a low of 670 f.p.s. to 691 f.p.s. And the rifle became even smoother.

When the rifle was out of the stock I got a good look at the trigger. It’s housed in a sheet metal box that’s welded to the spring tube, so no modularity. But the parts look simple and relatively straightforward to work on. I think I can at least lubricate them and adjust the two screws properly. 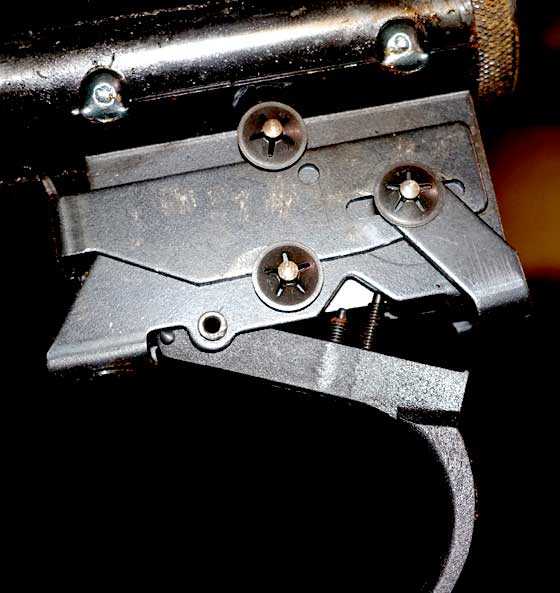 The trigger appears straightforward and accessible.

I’m starting to think this rifle will be all right! The vibration is nearly gone and I think I can adjust and lubricate the trigger to get it smoother and lighter than it is now.

I will start testing for accuracy next, but I’ll also show you more of the rifle, plus I’ll make those adjustments to the trigger that hopefully make it better.

Ultimately I want to try this rifle with a real peep sight, if my eyes will focus. If not there is a dovetail that can accept optics. We shall see!

Airgun lubes – the good, the bad and the ugly