The BSA Airsporter Mark IV is an all-time classic.

Sometimes the bear eats you. That will be the theme of today’s test of the BSA Airsporter Mark IV at 25 yards,  shooting with open sights.

You may recall that in the last test of this rifle at 10 meters with open sights, I got a tantalizingly good group of 9 out of 10 Eley Wasps. It was good enough to make me start the 25-yard test with the same pellet.

The first shot hit the target high on the edge of the bull at 11 o’clock. I reckoned that was good enough for me, so I shot the next 9 without looking again. I didn’t even look through the spotting scope after I was done. I just walked downrange to change targets, and thought I would see a one-inch group, perhaps with a flier or two. What was actually there was ten shots spread out in a group that measures 2.471-inches between centers. Clearly not what I had imagined! 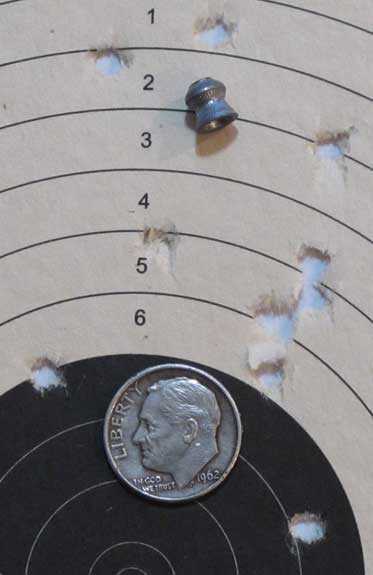 Not what I expected. After the good group with this pellet  at 10 meters I was hoping for something smaller at 25 yards. Ten Eley Wasps are in 2.471-inches.

Why did this happen? Is the Wasp somehow unstable beyond 10 meters? I don’t think so. Was I having problems aiming? That’s far more likely. Is the gun off a little? Probably. I will have more to say about that at the end of this report.

Remember, I said I wanted to try some different pellets in this test? Now was my chance. If the Wasps weren’t that great at 25 yards would something else be better? The wide dispersion at this distance is a much better indicator of the accuracy potential than the groups at 10 meters.

I knew from the last test that German pellets are too small for the bore of this rifle, but RWS Hobby pellets have very wide skirts. I thought they might give me some latitude in the Airsporter.

Alas, that was wishful thinking. Ten Hobbys went into a group that measured 3.737-inches between centers! That’s going the wrong way! 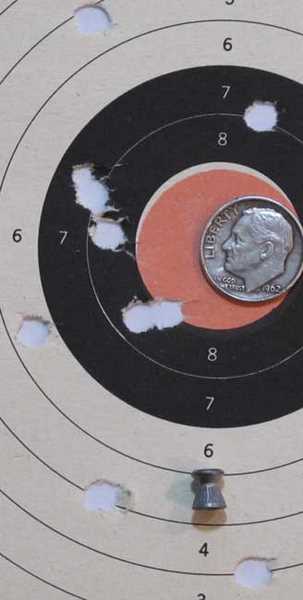 Yuck! This isn’t good! Ten RWS Hobby pellets made this 3.737-inch group at 25 yards, when shot from the BSA Airsporter.

Okay, German pellets still don’t work, no matter how big I think they are. What’s next? Well, since there is nothing to lose, I tried 10 JSB Exact RS pellets.

The first pellet struck the target about 3 inches lower than either of the first two other pellets. Also, the shot cycle was harsher. I don’t think this pellet gives the piston the resistance it needs. After the first shot I didn’t look at the target again until I went downrange to retrieve it.

Oh, my! The group is lower on the target, but it’s also the smallest group of the three pellets tested. Ten JSB Exact RS pellets went into 1.849-inches, center to center, at 25 yards. While that is nothing to brag about, it is the best I have seen so far from this rifle at this distance. 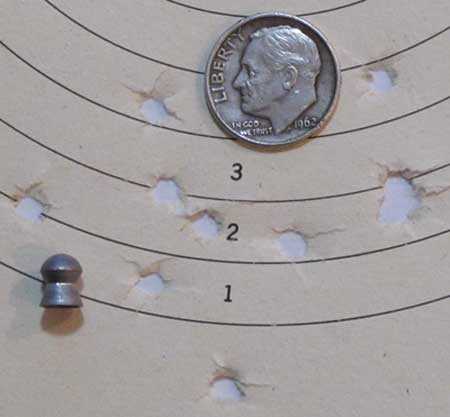 This is better, but only by comparison with the first two groups. Ten JSB Exact RS pellets went into 1.849-inches at 25 yards.

How is it working?

The Airsporter is still shooting dead calm, so the Tune in an Tube I applied many shots ago is still working as advertised. The trigger breaks crisply enough to be enjoyable. Despite the rifle’s power, I am resting it directly on a sandbag, because I also tested it with the artillery hold an had no luck. Resting it on a bag makes testing easy, though it isn’t the way I would shoot the rifle in the field.

Do I try this again — maybe with other pellets? I think before I do that I would like to tune the powerplant. I’d like to see the additional power so many readewrs have said should be there, plus I would like to calm the shot cycle a little.

Several people tell me they can’t wait to see how I handle the Airsporter’s pointy end cap when I disassemble the gun. I have a thought about that, but you’ll just have to wait for it.

I may mount a good scope sight on the rifle, because I wasn’t that confident in my ability to aim well during this test. My right eye goes from adequate to poor at times, and today it was off the mark. A scope would put to rest any problems like that.

If the tuned Airsporter will then put 10 pellets into one inch at 25 yards, I think I might keep it. If it won’t, I will sell it, and someone will get a rebuilt Airsporter. I already have a Hakim that features pretty much the same powerplant and is as accurate as I want. I don’t need more than one like that, though the Airsporter is different enough to make it interesting.

If I ever find a nice Mark I Airsporter, I will try to acquire it — if only to say I owned one for awhile. It’s a bucket list item for me.