Today we look at the velocity of the HW 55SF target rifle. I will tell you now that I was surprised by the performance. This is an air rifle that lives for years in my gun closet and only occasionally gets shot, so I forget how it works. It’s like a brand new airgun every time.

I have owned several HW55s over the years. One was the Custom Match that was their final release of the 55 series. It came out several years after the World Cup matches had switched to FWB 150/300s and Walther LGRs, so it never had a chance to dominate, but it was still quite a target rifle.

I also owned a 55 Tyrolean that put me off Tyroleans for a long time. It just wasn’t fun to shoot. I tuned that one for you in the blog and got it shooting faster, but eventually I got rid of it.

The pellet I linked to weighs 7.87 grains, but the truth is, my pellets are much older and don’t say Light on the tin. They say High Speed. So, I weighed a couple to see if they are the same as the ones I linked to. Three pellets weighed 7.5, 7.6, and 7.7 grains, respectively, so let’s call them 7.6 grains. At that weight this pellet generates 6.34 foot pounds at the muzzle

These pellets fit the breech loosely and the rifle buzzed every time it fired. The buzzing is most unpleasant on a target rifle that you are concentrating on shot after shot! But I have to say — the trigger seems to be adjusted fine!

Next I tried Sig Match Ballistic Alloy pellets. These are lead free and weigh 5.25 grains, so you know they will be faster. I guessed somewhere in the mid-700s, but they averaged 811 f.p.s. The spread was 16 f.p.s., going from 801 to 817 f.p.s. That is the tightest spread of this test. These Sig pellets have turned in some remarkable results in past tests, and I am hoping they will with this rifle.

They also fit the breech loosely and produced 7.67 foot-pounds. Lighter pellets usually do produce more energy in a spring-piston powerplant. The buzzing continued.

Next up were some Qiang Yuan Olympic pellets. This is another target pellet that has performed well in past tests. They weigh 8.2 grains, so I expected to see velocities in the mid to high 500s. but surprise, surprise, they averaged 626 f.p.s. That’s faster than the lighter Finale Match pellets! The spread was 17 f.p.s., which puts them right there with the Sig target pellets.

These pellets also fit the breech loosely. In fact, one fell out as I was closing the barrel, so the string I reported is for 9 shots instead of 10. At the average velocity this pellet generated 7.14 foot pounds of energy.

These pellets actually fit the HW 55SF breech the loosest of all. They went into the barrel 1/16 inch (1.59mm). At the average velocity this pellet generated 6.05 foot pounds of energy. I think the loose fit robbed some of the power.

One nice thing about 10-meter spring rifles is they are easy to cock. If they aren’t, I want nothing to do with them. The HW 55SF cocks with 18 lbs. effort for most of the way, but there is a spike to 22 lbs. at the end. It’s not the mainspring causing it; it’s something mechanical. Maybe when I look inside the powerplant I can eliminate it.

Stage one takes 3.7 ounces and stage two releases at 8.3 ounces. That’s pretty light, but not as light as one of the better target rifle triggers from the 1960-70s.

I’m going to test the accuracy next. That won’t change when I tune the rifle, so I can test it now.

Then I’m going to look inside the powerplant. I want to quiet the mainspring at the very least. I can do that with Tune in a Tube, or I can do it by eliminating all the slop between the parts. I’ll have to think about what I want to do awhile. I will also take more pictures of the special target Rekord trigger for you.

It’s been fun looking at this rifle after so long. I can’t wait to see what else I learn or remember. 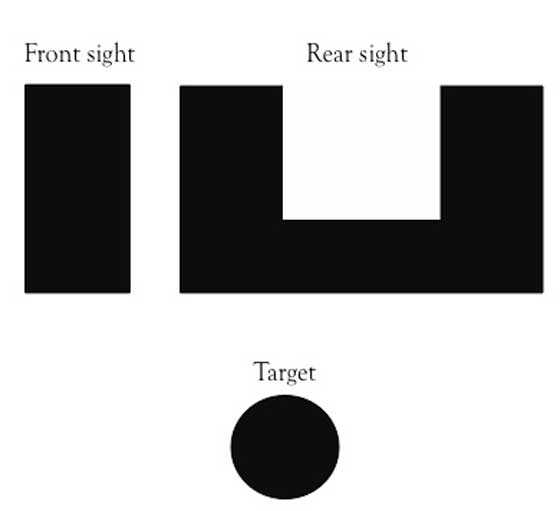 Teach me to shoot: Part 3