Today I start looking critically at the accuracy of the new Sig ASP20 breakbarrel rifle. Until now I have only shot 5-shot groups. They are okay for quick work but do not tell the whole story. Today I will shoot 10-shot groups and we will learn the accuracy of this new rifle with some precision. I won’t get into the statistical reason that 10 shots are better than 5, but here is a good bottom line — anybody can get lucky, and it is far easier to do it 5 times in a row than 10.

Before we get into this test report, reader Bimjo asked this.

“In a senior moment, I just remembered something I meant to ask in my last post- what does the Whiskey 3 reticle look like? I’ve looked all over the web and haven’t seen anyone describe it.”

That is a very good question, so I asked Sig for a picture. Ed Schultz sent me one he uses.

A representation of the Whiskey3 reticle.

This representation is not exact. The reticle lines are not heavy like you see here. But it is a good likeness. It is a duplex reticle with mil hashmarks along both lines.

Today I shot from 25 yards off a sandbag rest using a variety of different holds that I’ll describe as we go. Normally I shoot in the morning when I’m fresh. Today, however, I shot in the afternoon right after lunch. That changed things, as I will describe.

Couldn’t get the rifle to group!

I shot about 40 shots and could not seem to keep them, together. Group after group was opened by what I thought was a wild shot. I shot the Air Arms pellets that did so well in the last test. But like I said — anyone can get lucky 5 times. So I wondered if I had been wrong about the accuracy. Or, had the barrel become dirty with the few shots fired in the last test?

Then it happened. I had an “ah-ha” moment that told me what was probably happening. If I hadn’t spent the better part of 6 months on the rifle range a few years ago with my pal, Otho, dealing with this same thing, it would have slipped past me, but this was something I knew only too well — the dreaded double group!

It’s important to understand that by the time I discovered this I had already fired the rifle 40 times at least. So I was very warmed up. I was almost worn out! However, when what I am about to show you happened, I thought I knew exactly what caused it and also how to deal with it. 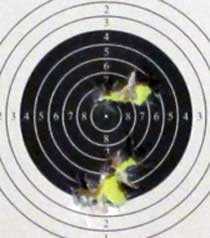 This target shows two distinct “groups.” The bottom one has at least 5 shots in it and the top has at least 3.

Ever shoot a target like that? Know what causes it? Subtle variations in your hold cause small variations in the harmonics of the gun — mostly in the barrel. The pellets are trying to go to the same place, but they leave the muzzle at different points.

BY THE WAY — no statistics are required!! This is an excellent example of why 5 shots do not represent what the rifle is doing as well as 10.

The double group told me I wasn’t taking enough care in how the rifle was rested before each shot. It was just after lunch and I was digesting my food, so my body wasn’t as calm as it normally is. But knowing that, I could fix it.

I began by resting the rifle directly on the sandbag. The last test I did in Part 6 suggested this rifle isn’t as accurate rested on a sandbag as it is when held by an artillery hold. But I had just shot the rifle 40 times with the artillery hold and accomplished nothing. At least the sandbag would be stable. As long as I put the forearm in the same place each time, it should give me good groups.

Ed Schultz had sent me a tin of Wraith Ballistic Alloy pellets to try because he has found them to be quite accurate in the ASP20. I had tried Wraith Lead pellets previously, but didn’t find them as accurate as some others.

I had tried the Wraith alloy pellets in the 40 shots previously this day, but now I wanted to give them the absolute best chance for success. I discovered they want to be seated deep in the breech, so I used a handy ballpoint pen to seat each pellet. This time, off a sandbag rest, 10 Wraith alloy pellets went into 0.438-inches at 25 yards. The group is reasonably round and good-looking, and it told me all I needed to know. The ASP20 is still very accurate. Care must be given to how it is held or rested before each shot. 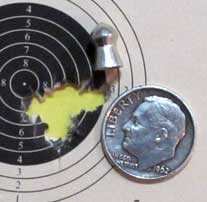 Ten Wraith Ballistic Alloy pellets went into 0.438-inches at 25 yards when the ASP20 was rested directly on the bag and the pellets were seated deep.

I can do this!

That nice group actually woke me up — especially after shooting the double group and knowing what the problem was. If the gun can shoot that well, I certainly can, too. Enough of this resting on the bag stuff. It was time to use the artillery hold the way it was meant to be used! I rested the forearm on my off hand right under the start of the cocking slot. That way I knew I could find the same place, time after time.

Next up were some 16-grain Air Arms domes. These were the pellets that gave me that stunning 5-shot group that measured 0.072-inches between centers in Part 6. I have always said that a 10-shot group should be about 40 percent larger than 5 shots with the same pellet, but that only comes out to 0.1008-inches in this case. How close could I come to that?

This time 10 shots made a 0.416-inch group at 25 yards. So, there probably was a lot of luck in the smaller 5-shot group. But today’s group is still great! 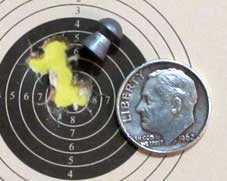 N ext I tried 10 Air Arms Falcon pellets — also using the artillery hold. Ed Schultz told me the rifle likes pellets in the 14.5 to 16-grain range and Falcons are only 13.43-grains, so let’s see what they can do.

Ten Falcons went into 0.463-inches at 25 yards. It was a good group, but the largest of the test. 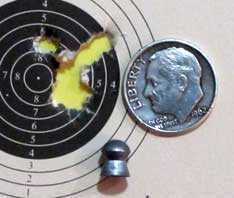 I was tired at this point. I had now shot 70 rounds with concentration and that takes a lot out of me. But there was one more thing I wanted to see. According to my results, a group of Wraith Ballistic Alloy pellets shot with the artillery hold should be slightly smaller than the group I got resting the rifle directly on the bag. So, I gave it a go.

As I watched this group grow ever-so-slowly, my nerves began to fray. Could I hold on for 10 good shots? Well, after shot number 6, I never saw the group size increase. This time 10 pellets went into 0.324-inches at 25 yards. The group is almost perfectly round — telling me two things for certain. First — the artillery hold I have described in this report is the best way to shoot this rifle and second, the Wraith Ballistic Alloy pellet is the most accurate one I have tested so far. 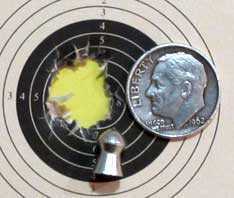 Ten Wraith alloy pellets shot with the artillery hold at 25 yards went into this nice round 0.324-inch group.

I’m not finished testing the ASP20, but I will give it a break for awhile. In summary I have to say the following:

1. The ASP20 is the most accurate breakbarrel air rifle I have tested.
2. The Matchlite trigger, while not a match trigger, is the best American-made spring-piston sporting air rifle trigger ever.
3, The ASP20 cocks easier than any other spring-piston breakbarrel in its power class.
4. The keystone breech has no competition.
5. Sig knows how to rifle an airgun barrel.
6. If you are looking for a good sporting spring rifle you can’t do better than the ASP20. But that only holds true when you do your part.