Today we take a second look at the Sig ProForce M17 airsoft pistol running on CO2. I discovered last time that the Hop-Up adjustment is very sensitive. I also discovered a couple BBs that are potentially the best in this pistol when it’s running on CO2. You will recall that I also have a magazine that takes a green gas charge, so that’s going to be a separate accuracy test that I will do in the future.

The two BBs that seemed to be the best last time are the Infinity 0.25-gram and the Valken Accelerate 0.25-gram BB. Both of these are biodegradable. The Infinity seemed to edge the Valken just a little, so I started the test with it. read more

Today is really two reports in one. I’m covering the new UTG 4-16 AO Compact scope and this is also the fifth report on the FX-Dreamlite precharged pneumatic air rifle. I’m glad I got back to it because I found a second good pellet for the rifle today. But first the scope.

Because the FX Dreamlite is such a drooper I tried to use the Sportsmatch 30mm high adjustable scope mounts. The would have been ideal, but they don’t work because of the FX 21-shot magazine that sticks up so high above the top of the receiver. I ended up using the True Strength mounts that came with the UTG scope and I shimmed under the scope on the rear ring. The scope barely fit so the magazine can be installed. And yes, I am aware there is a Mini FX 10-shot rotary magazine available. I just don’t have one. But that’s what this rifle needs. read more 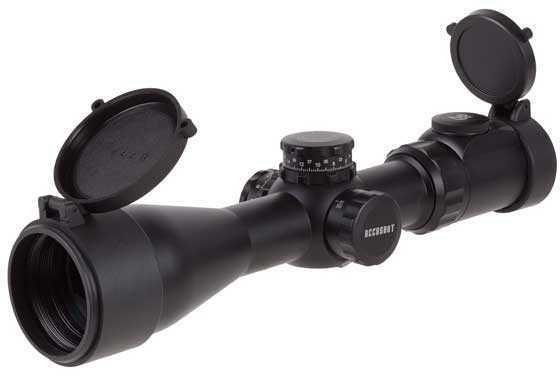 Okay, Lucy (from the TV series “I Love Lucy”) got some ‘splainin’ to do. Why is today Part One of a report on the UTG 4-16 AO Compact scope and yet there are links to Parts 1, 2, 3 and 4? Well, those links all go to the FX-Dreamlite that I last tested in July. At the end of Part 4 I said I had more to test, and this is the start of it.

As you know, the Dreamlight that I tested had problems delivering the accuracy we expect from an FX. It has the Smooth Twist II barrel, which we discovered is very pellet-specific, but I still have not tested it with a good range of pellets it likes — especially the heavier ones. I told you way back in July that there was more to test and today is the start of it. read more

Before we start let me tell you that I wanted to finish my report on the IZH MP532 rear sights today. The reason I didn’t is because as time passes I learn more and more about them. I want to make certain that I have explored everything I can when I write that report. It will also have at least one video.

For today I thought I would return to this subject that many readers seem to enjoy. Please understand that B.B. Pelletier isn’t the world’s authority on shooting. I do know some things, though, and I enjoy writing about them. If what I know can help anybody, then I have done my job. read more

Settle in, kids, because today holds a huge discovery. Today I shoot the two IZH MP532 rifles for accuracy.

I shot off a rest at 10 meters. Since a single stroke pneumatic doesn’t recoil, the gun can be rested directly on the bag. I shot 5 shots at each target so I could test more pellets, and there were also two rifles to test. I began the test with the latest rifle that was made in 2007.

I started the test by pumping the lever 3/4 of the way 20 times to flex and warm up the pump cup. Then on every shot I pumped 3/4 of the way, relaxed and then pumped all the way. We learned in Part 2 that this makes the rifle shoot as fast as it can and also keeps the velocity stable. read more

Several weeks ago, reader New to Old Guns (NTOG) contacted me with a new project he was working on — a dueling tree for lower-powered BB guns.

Today’s target is an action target, but it’s one with a big difference. I’ll let him tell you what he first told me.

“It is a “down to about 1ft-lb capable shooting tree”.  Yes, you can have fun with a shooting tree with the Red Ryder!

“The short version — I realized I was having a ton of fun with the big tree “dueling” and “racing” guns like the Vectis, Sumatra, Nova Freedom, and AT44.  But I couldn’t shoot that tree with my son, as he’s 12 and doesn’t have anything near the about 18 ft-lb needed to flip those paddles.  I remembered a bud talking about bending and flattening cheap spoons for use as targets, and, well, one thing led to another.  Good shooting with the Red Ryder is enough to flip it.  So any BB gun shooting in the neighborhood of 300 fps will work.  That means training pistols like the Sig P226 should flip it too.  Doesn’t that open a world of entertaining practice? read more

You’re gonna get your money’s worth today! Today I start testing the accuracy of the new Sig Sauer M17 ProForce airsoft pistol.

I shot off a rest at 10 meters. The pistol was rested directly on the sandbag. That seemed to work well and I am pleased with the results. I shot different numbers of BBs with different aim points, so I will describe what I did for each target as I go.

I started the test with the sample 0.20 gram BBs Sig sent with the pistol. I thought they are too light for CO2, and the velocity test in Part 2 seemed to confirm that, but Sig sent them so let’s see what they do. read more