This screw pulls the two halves of the sheet metal together, pushing the front of the guide rail upward. That tightens the fit of the carrier on the rail — affecting both accuracy and velocity. read more

Sometimes we like things for reasons that make no sense to others, though we know why. Today’s report focuses on a BB gun that I have liked for many years, after discovering late in life that it existed at all.

Daisy’s Number 12 Model 29 is a lever action BB gun with a difference. It looks older than it is. It resembles a Daisy model H that was made from 1913 to 1923. The strangest thing about the model H is the cocking lever, which catches your eye immediately. In many respects these guns look similar to the more common BB guns we know today, but that cocking lever seems strange. I have not read an explanation for why it looks like it does, so allow me to posit a guess — leverage.

BB guns of this era have powerful mainsprings compared to the guns of today, and they are much harder to cock. I am guessing the designers at Daisy decided to do something about it. Most adults will not be able to get all 4 of their fingers through the smaller loop, but when you put the first three through, your thumb then pushes against the straight section ahead of the loop, making the lever much easier to cock. I may be completely wrong about the reason for the design, but that’s the way it works. 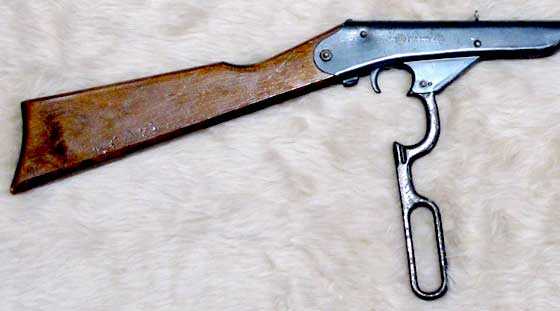 This is as far as the cocking lever moves when the gun is cocked.

This model 29 was made from 1929 until 1942, when Daisy stopped making all BB guns to make war materiel. After the war this model was not resumed — probably because it shot a BB that was growing increasingly obsolete.

This gun has a barrel that quickly removes so a dart can be loaded in its breech. To take the barrel out the front sight is spring-loaded in a bayonet notch. Push back the sight and rotate slightly and the tube comes free. Edward C. Hough patented this feature in 1908, and for some reason his name has been associated with it ever since. 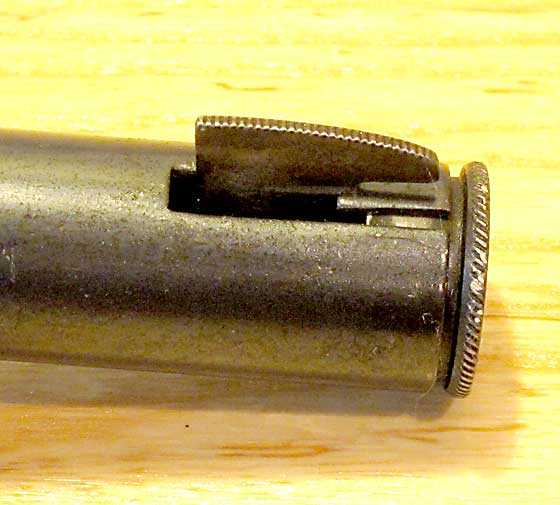 The Hough front sight is spring-loaded to keep the shot tube in the gun. Push it back and rotate to release the tube.

How was a single shot BB gun loaded? At the risk of not being politically correct, let me tell you that little boys with single shot BB guns went around with several BB shot in their mouth! That’s right — lead BB shot, or Air Rifle Shot, to use the correct title. When it came time to load their guns they expertly spit a single BB down the muzzle. Mothers of America unite! I can see a whole career of gun safety lectures, right here!

The muzzle of single shot guns was often shaped like a funnel, to help with the loading process. This continues today on Daisy’s 499 Champion BB gun. 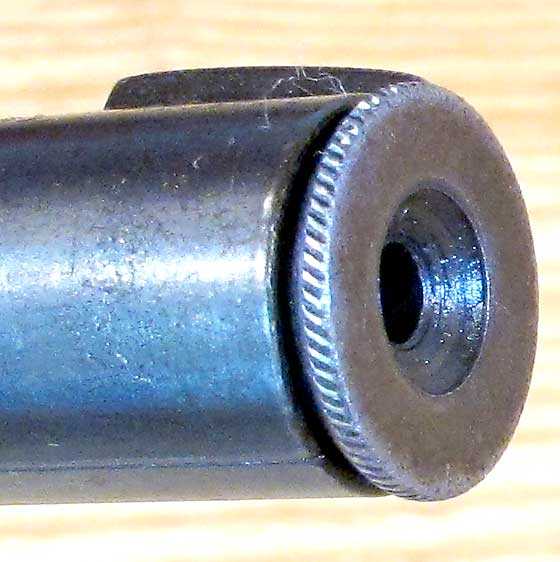 The thing is — it works. Or, at least dropping a BB down the muzzle works. There is no magnet in the breech. You’d need a lead magnet anyway, since this gun is caliber .175 instead of the caliber .173 of a gun made to shoot steel BBs. The shot tube does not taper near the breech to hold the BB tight, so I have no idea how Daisy did this, but it does work. After loading, I held the muzzle straight down and shook the gun. The BB stayed put. [Aside — NOW can you see my frustration when a manufacturer labels their BB gun as .177 caliber/4.5mm? It might not matter to those who buy from discount stores, but in my world it makes a big difference.]

The BB changed from lead to steel

In the late 1920s the BB changed from lead to steel and got smaller by two thousandths of an inch. Read about the history of the BB in this report, How BBs are made. This was also the time when the BB gun changed from shooting lead Air Rifle Shot (sized 0.175-inches) to steel shot (sized 0.171 to 0.173-inches), and that forced some changes in the guns. Today’s gun is an old school gun that was made for lead shot. That fact is even confirmed in the Blue Book of Airguns. I therefore want to use the right ammunition for this test. 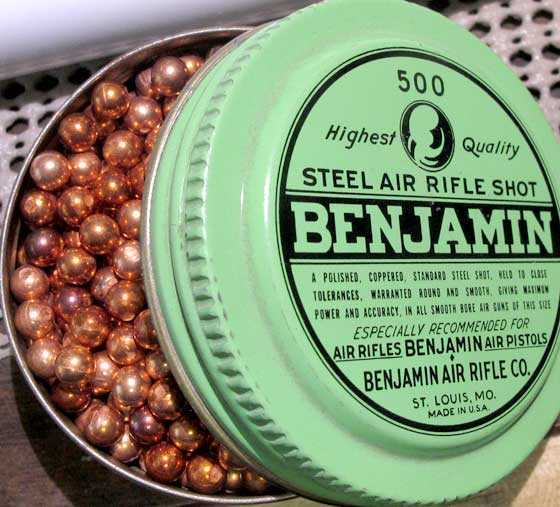 They talk a good game on their tin, but each BB inside has two pronounced flat spots. You can see a couple of them here. 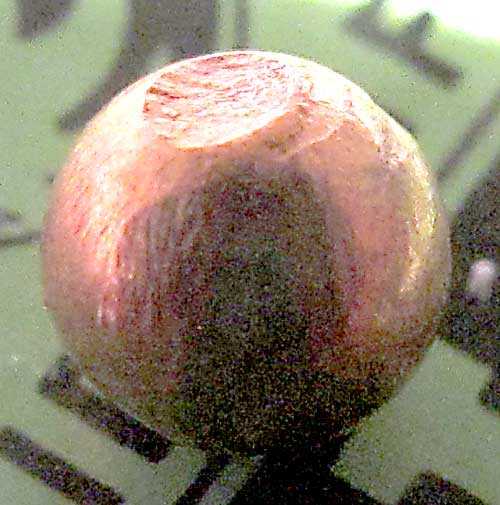 Pardon me for using a handheld macro shot that had to be enhanced a lot. While setting up this photo I dropped this shot on the hard floor. It rolled a few inches then stopped on the flat spot opposite the one seen here. Every BB in the tin has two of these flats. At least they were consistent. read more

This is about a BB gun you fondly remember, but never heard of.

Today’s BB gun looks like many others from the turn of the century, especially the model H that lasted from 1913 until 1922. The No. 12 Model 29, however, is a single shot that was produced from 1929 until 1942, when Daisy put BB guns aside for the war effort. Although it is a later gun, it retains many characteristics of much earlier BB guns.

The most notable feature is the cocking lever that has a small finger loop, as opposed to the levers on most Daisys with full sized loops. The lever is cast iron, a vestige of guns made decades earlier. Because it lacks a forearm you can clearly see the sheet metal weld that seals the compression tube. This is where the soldered patch used to be — before Daisy figured out how to weld the thin metal tube airtight.

This report is for Reb, who found part of a Daisy model B in the grab-bag box of airguns he bought at the 2015 Texas airgun show. He said he likes the size of the B and I immediately thought about the Model 29. It is positively diminutive — even when compared to other small BB guns. You’ll see that when I describe it for you.

The overall length is 30.5 inches. That’s 5 inches shorter than a Red Ryder. Pictures of the gun don’t illustrate this unless it’s shown next to another BB gun.

When seen next to a Red Ryder (top), you can appreciate how small the model 29 is.

The length of pull is 11.75-inches. That’s right for a smaller youth model BB gun.

The stock looks like gum wood that was popular at Daisy in that timeframe. And it’s just a buttstock; there is no forearm, nor is there any provision for one. The wood is flat on both sides and rounded over top and bottom. The butt has a Winchester carbine butt curve that probably won’t mean much to most readers, but it is a way of describing rifle buttplate shapes in the late 19th and early 20th centuries.

The finish is blue, which was the only finish this gun came in. Many guns at this time were nickeled, but for some reason, this one never was. The metal is polished nicely — evidence of more handwork than you would see today. 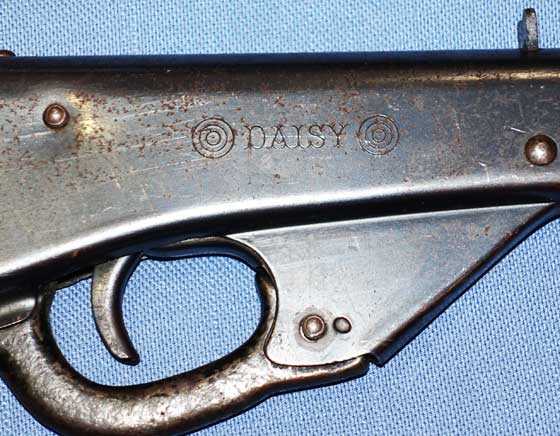 The Daisy logo at the time has a bullseye on either end of the name. It looks retro!

I have mentioned the soldered patch tube in past reports. Daisy used to have to solder a patch to the bottom of the folded metal outer barrel jacket to form an airtight inner chamber for the plunger (piston) to work. On this model 29, the weld is prominent.

The welded section of the outer barrel is only long enough to contain the air from the plunger in its travel. The compression chamber has an end that’s is swaged into the barrel jacket (on the right) at this point — forming a perfect compression chamber.

The guns if this era are all difficult to cock. On the model 29 the lever comes only as far as the halfway point before the gun is cocked. The mainspring has to be fully compressed by this point. Later on Daisy learned that they could lengthen the cocking stroke and reduce the effort required through better leverage. But that hadn’t happened yet. 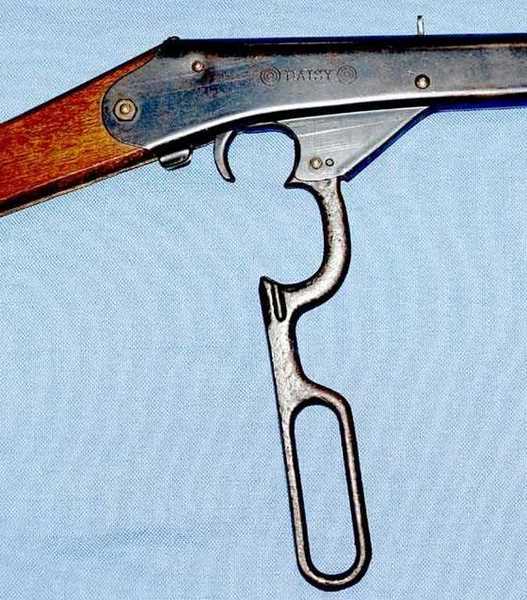 This is as far forward as the cocking lever goes. The leverage was not good and these guns were harder to cock.

The sights are fixed — more or less. The rear sight is definitely fixed. Not only is it the sight, it’s also the spring anchor for the powerplant. That was a common way for the less expensive Daisy guns to be built. 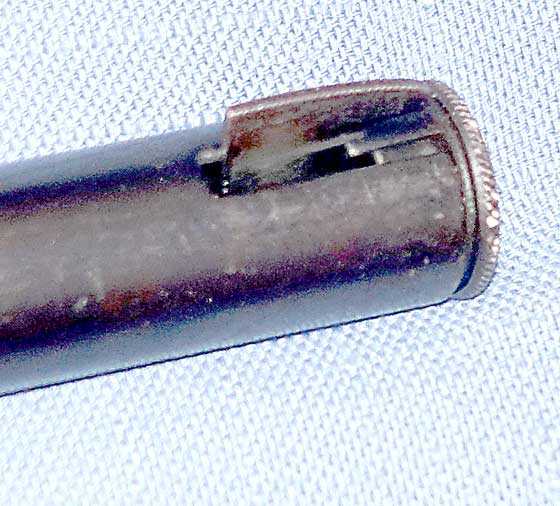 The front sight is also a spring-loaded latch to locks the shot tube in place. read more