Trigger adjustments come in two different types. One adjusts the spring tension of the trigger return spring, and adjusting it will give a somewhat lighter trigger-pull. The other adjusts the actual sear contact area and makes the trigger release crisper without affecting the pull weight. That’s the type of adjustment the 68 has. It also has an adjustment for the length of the first-stage pull; and on this gun, I found stage one had been adjusted completely out. So, you started the pull on stage two — effectively giving the rifle a single-stage trigger.

Adjusting the trigger
The following instructions for adjusting the trigger are taken from the El Gamo owner’s manual for the 68 and 68-XP that David Enoch was kind enough to supply. They might also apply to the El Gamo model 300 rifle, which has the XP action in a conventional wood stock. I don’t know that the 300 has the same trigger adjustments, but I assume that it does.

The larger screw in the center adjusts the length of the first-stage pull. Turn counterclockwise to lengthen the pull and clockwise to shorten it. As I mentioned, it’s possible to eliminate the first stage altogether.

The screw in back adjusts the sear contact area. It does not lighten the trigger-pull, so be careful not to over-adjust it or the rifle will not cock, as mine did not. Turn counterclockwise to increase the sear contact area and clockwise to decrease. Ostensibly, this adjustment would give you a crisper trigger release, but I didn’t see any difference at all. But when the contact area was adjusted too small, the rifle failed to catch when cocked. 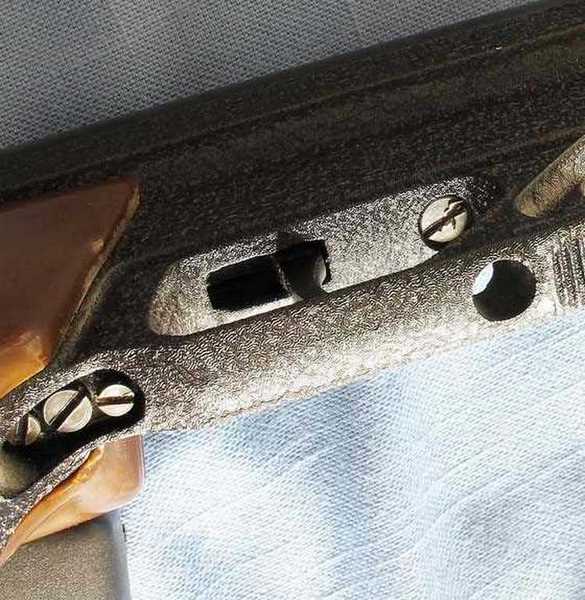 Three trigger adjustment screws are located at the back of the triggerguard.

I was able to put back a long first-stage pull that I like; so now when the trigger stops, I know it’s at stage two and ready to break. Stage two was set with much more contact area, and now the rifle catches every time it’s cocked. I can’t detect that the pull has changed in weight or crispness. After it breaks, the trigger blade is at the end of its travel. It feels like there’s a trigger overtravel adjustment, but there isn’t.

The trigger blade is much too thin for the pull weight, which is between 7 lbs., 14 oz. and 8 lbs., 10 oz. This trigger can really benefit from the installation of a trigger shoe. I have a couple of them around somewhere, so I’ll try to find one and see if it benefits the rifle as much as I think it will.

Firing behavior
The 68 fires very quickly and ends with a sudden small jolt. The feeling is strange, because you don’t expect a rifle this small to be so quick. It’s definitely not an R7! On the other hand, there’s virtually zero vibration with each shot. You might expect it to buzz a little because it’s an El Gamo, but you’d be surprised. Clearly, this rifle’s action is made much smoother than the current crop of Gamo spring rifles.

Since I own the rifle, I’m tempted to take the action out of the stock to see what I can do to smooth the firing cycle even more. If I can get the trigger to break reliably at 3 or even 5 lbs. and still be as crisp as it is, this would be one of my better spring-piston rifles.

Balance
The 68 appears to be butt-heavy, but that’s only an illusion. In fact, it’s somewhat muzzle-heavy, which stabilizes the rifle in the offhand position. The lack of a forearm means you have to hold it more like a pistol that has an attached shoulder stock, and both hands are centered around the vertical pistol grip. I don’t care for that hold, which is why a more conventional model 300 would suit me more, if all other parts of the action remain the same.

Velocity
The gun seems to have a leather piston seal; but even if it doesn’t, it might benefit from the application of some silicone chamber oil dropped through the air transfer port behind the breech. I tested it with three pellets, both before and after oiling.

RWS Hobbys
The first pellet I tested was the 7-grain RWS Hobby. This lightweight lead pellet is often very accurate in lower-powered spring guns and gives the highest velocity consistent with accuracy. Before oiling, Hobbys averaged 612 f.p.s., with a range from 604 to 615 f.p.s. They produced an average 5.82 foot-pounds of muzzle energy and the total velocity spread was a tight 9 f.p.s.

Crosman Premier 7.9-grain
Next came the 7.9-grain Crosman Premier domed pellet. Before oiling, this pellet averaged 570 f.p.s., with a range from 558 to 588 f.p.s. They produced an average of 5.7 foot-pounds of muzzle energy. The total velocity spread was 30 f.p.s.

RWS Superdomes
The last pellet I tested was the 8.3-grain RWS Superdome. Before oiling, the velocity averaged 534 f.p.s. with a spread from 522 to 545 f.p.s. That produced an average of 5.26 foot-pounds of muzzle energy.

After oiling, the same pellet averaged 524 f.p.s. with a spread from 519 to 527 f.p.s. At the average velocity, this pellet produces 5.06 foot-pounds of muzzle energy.

What have we learned?
The first thing we learned was the need to properly adjust the trigger for contact surface. It didn’t change the pull weight, but it did correct the gun’s inability to cock positively.

Was it necessary to oil the gun? Probably not; but as the oil wears off, the velocity will increase again. Does the gun shoot any smoother as a result of oiling? I can’t tell any difference, so maybe this gun was working okay as it was.

The trigger could probably benefit from some lubrication and perhaps from more careful adjustment. I’ll have to see it closer to know if there’s anything that I can do to make it better.