Today I will shoot my vintage HW85 at 50 yards for you. One thing I’m testing is whether resting the rifle on a Caldwell Lead Sled will improve accurate. Reader Bob from Oz says it will. We’ll see.

The day was perfect for a test like this. It was 34 degrees with just a hint of a breeze. I shot in three different positions that I’ll describe as we go. The rifle is still sighted in for 25 yards, so the pellets dropped about 3 inches at 50 yards. And I used the Crosman Premier pellet that has worked so well for this rifle in the past.

First up was the Caldwell Lead Sled. It is an adjustable rifle rest that is designed to absorb the recoil of a heavy recoiling rifle. You can stack lead weights or barbell weights on the tray — hence the product name. 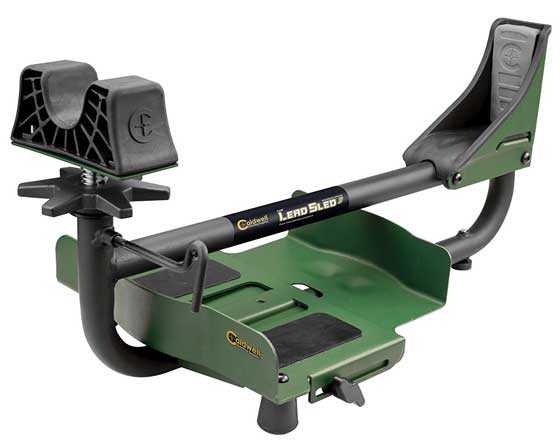 The Lead Sled is a rifle rest that mitigates recoil.

To shoot a breakbarrel off a rifle rest the rifle must be cocked and loaded each time, which means taking it out of the rest. With a repeating firearm or even with many single shots the rifle can settle into the rest, but not in this case. It took a longer time to get back on the target each time. But once on target, the rest holds the rifle very steady.

The rifle was difficult to shoot because the rest holds it and not the shooter. That feels better with a centerfire rifle than it does with a breakbarrel pellet rifle. The scope was further from my eye and the exit pupil was smaller by half. I just didn’t like the way the gun felt in this rest.

The HW85 put 10 Crosman Premier pellets into 3.054-inches at 50 yards. That’s not a very good group! One test may not be very conclusive, but given the way the rifle felt in the rest, I doubt I will try this again. 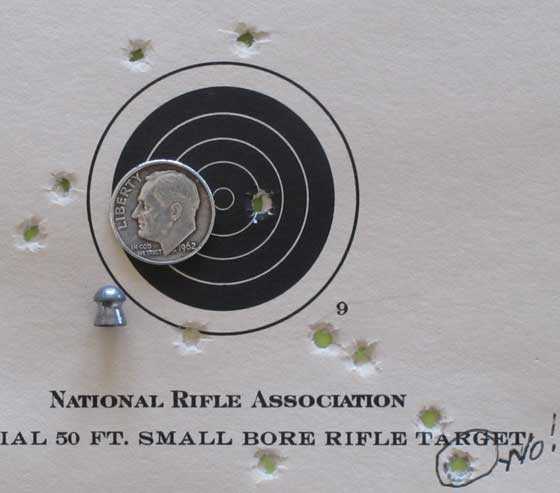 When the rifle was rested on the Lead Sled it put 10 Premier pellets in 3.054-inches at 50 yards. The hole on the lower left is not part of this group.

In the second test I tried the rifle rested directly on the sandbag. If the rifle rest in the first test was bad, this was horrible! I can’t even show you all the shots, because 3 out of 10 missed the target paper altogether. The 7 that did hit the paper measure 5-3/4-inches between centers. I won’t even show this “group” because it was a total failure.

For the third test I used the artillery hold and got what I think is a good result. Seven of ten pellets are in a group measuring 0.657-inches between centers. If those were  all 10 shots I would now be screaming, but they weren’t. The other three pellets landed some distance away from this main group, openeing it to 2.357-inches between centers. That’s not very good, but I think I know why. 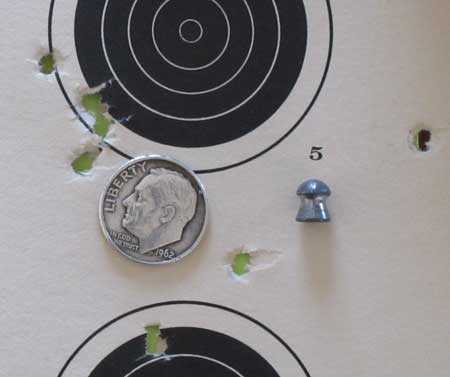 Upon re-reading my previous accuracy tests I discovered that the HW85 is sensitive about where the off hand is placed when you use the artillery hold. In this test I had the off hand back by the triggerguard, but my previous testing shows that it needs to be in the middle of the cocking slot for best results.

I consider this test a good result, even though the group isn’t that small. I think it does show the rifle’s potential.

I could try to refine my 50 hold in another test, but I don’t think I will. I learned what I needed to know and I will now keep the HW85 as my go-to 25-yard pellet rifle when it shoots Premier pellets.

I’ve enjoyed this series. It allowed me to get familiar with a pellet rifle I have admired from afar for many years. I was able to discover its secrets and get it to perform quite well. Given that this rifle is quite a bit lighter than my Beeman R1, plus being more accurate, I will try to leave it scoped and sighted-in! 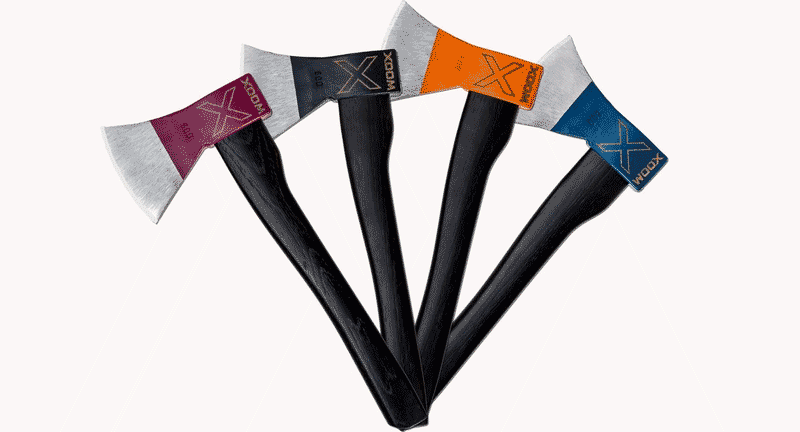 5 Reasons You Should Buy an Axe