Today I report on the Umarex Gauntlet. I had the rifle out at the range last Friday, where the weather was perfect for a 50-yard airgun test. I have shot the Gauntlet twice before at 50 yards but the first time it was too windy and the second time I felt the UTG 3-12X32 Bug Buster scope wasn’t giving it the best chance possible. The thing is, the groups I am about to show you are pretty much what I got on both those other days, although these are a little tighter.

This time the Gauntlet had an 8-32X56 UTG scope that is obsolete but is similar to this one, except for the illuminated reticle. 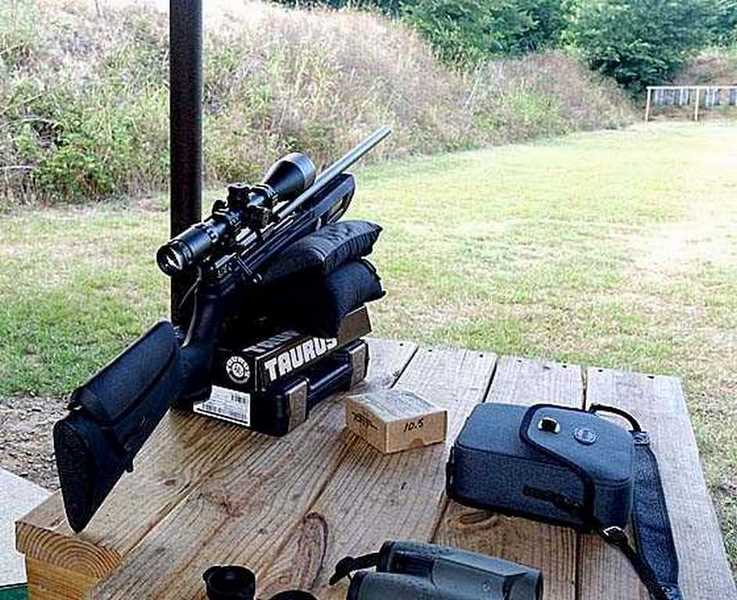 The Gauntlet on the 50-yard range.Yes, those are two gun boxes under the sandbag and yes, they are for reports you will be reading soon. This was a GOOD day at the range!

The rifle was shot from a rest at 50 yards. And I told you this last time, but to remind you, I only shot ONE pellet in the Gauntlet in this test. In Parts 6 and 7 I established that the Crosman Premier Heavy pellet does best in the test rifle. Remember — I have had this rifle out at 50 yards twice before, so I’m not guessing. I’m simply abbreviating the report. I shot off a sandbag and the primary purpose of this test, other than establishing the accuracy of the test rifle, was to see if there is a noticeable difference when I shoot it single shot and from a magazine. So that is the test I was performing.

The first group was fired single shot, using the tray that comes with the rifle. Ten shots went into 1.734-inches at 50 yards. Not too good. HOWEVER — and this is a huge however — I felt that at least two of the pellets had flipped around in the loading tray. I say that because of how hard they loaded into the breech with the bolt. Each was very hard to push in. The Gauntlet’s design with where the scope is makes it next to impossible to see the loading tray while you are shooting, so I didn’t visually check each pellet every time. 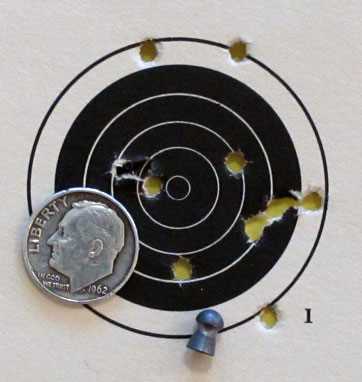 Ten pellets went into 1.734-inches at 50 yards. Two of the pellets loaded hard into the breech, which makes me think they loaded backwards. I think they are the two highest holes. The other 8 shots are in 1.177-inches.

When something like this happens I have to stop and think about what to do. I didn’t think this 10-shot group represented the Gauntlet’s accuracy potential that well firing single shot, so I resolved to come back and shoot a second group the same way. This time I would visually look at each pellet as it was loaded in to the breech, even if that meant getting up from my seat on every time. But first I wanted to try the magazine.

I loaded 10 Premier Heavys into the Gauntlet magazine and inserted it in place of the single shot tray. I was alert for feeding problems, since I had them in earlier tests, but this time everything fed well. And ten Premier Heavys from the magazine went into 1.97-inches at 50 yards. That is larger than the first group, but not by much. 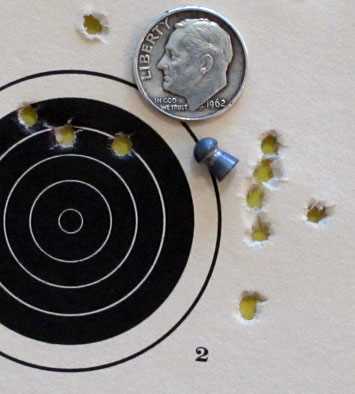 Ten shots from the Gauntlet’s magazine landed in 1.97-inches at 50 yards.

This time I resolved to look at each pellet as it was loaded into the breech. There were two times when the pellets rolled on their domed heads and tried to load backwards. I saw them as it was happening and was able to stop it. In the group you are about to see, every pellet was loaded nose-first.

This time ten pellets went into 1.563. That’s a little better than the first group, but it is significantly better than the group that was shot from the magazine. And that group concludes my test of the Umarex Gauntlet. 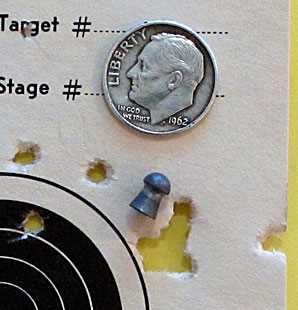 Ten Premier Heavys went into 1.563-inches at 50 yards when fired single shot. Six of them are in the large hole next to the pellet.

As I said, this was the third time I have shot the Gauntlet at 50 yards. I have used every pellet I tried at 25 yards and discovered that the Crosman Premier Heavy was the best, so that was the only pellet I shot for this test.

I have done a lot more than just test this rifle. I have adjusted the trigger, which required partial disassembly of the rifle to get the action out of the stock and I learned that I don’t want to do that again. Read Part 2 to see what I went through.

I have also tried the rifle with two different scopes. I was ready to blame the Bug Buster for larger groups until this test. My groups were better in this test, but this time I used the best pellet and I loaded it single-shot. I would say that I have now treated the Gauntlet very thoroughly.

The Umarex Gauntlet has many features never before seen at its price. It is a ground-breaking airgun. My results at 50 yards have not been that good, but from what I have read, others are doing very well with their rifles. I can recommend it to anyone getting into PCPs for the first time.