Today we see how accurate the Daisy model 105 Buck BB gun is when it’s scoped. You may remember I installed a Bug Buster 3-12X32 with an optional UTG 80mm Sidewheel on the gun in Part 3. And, as I closed that section I told you there was one more thing I wanted to show you. Let’s do that right now.

Besides the Little Buck Rail, Buck Rail.com also offers a 7-inch bipod for the gun. It sells for $16 as of the date this report was published. Wow! Not only are we scoping this Buck BB gun, we’re mounting a bipod. What will that look like? 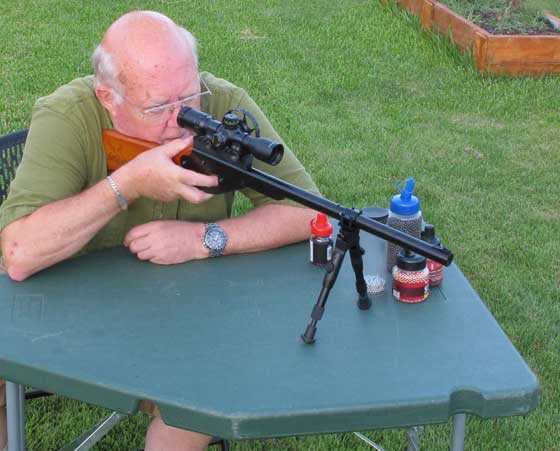 Yes, it looks silly, but read how the test went before you decide!

I shot from 5 meters and all shots were taken with the bipod attached. It took 5 rounds to sight in and I recommend to Terry Harman, the maker, to build some droop into your base, because at 5 meters the first shot hit 3.25-inches below the aim point. Even BB guns have drooping barrels!

The first BB I shot was the Daisy Premium Grade BB. In the last test from the same 5 meters and using open sights five of these same BBs went into a group that measured 2.808-inches. Today with the scope and bipod, The Buck put 10 into 1.391-inches. That’s twice the number of shots going into less than half the area! I would say that’s an improvement! 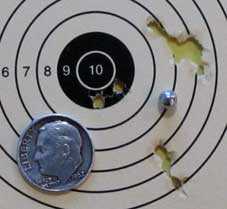 When scoped and sitting on a bipod the Daisy Buck put 10 Daisy BBs into 1.391-inches at 5 meters.

I was shocked, to say the least. This is such a dramatic improvement that it bears consideration. The bipod is rock-steady and the Bug Buster scope, with it’s 9-foot focus, is perfectly suited to this gun. Could this level of improvement continue? I went to the BB that was the most accurate in Part 2 — the Crosman Black Widow. In Part 2 five of them made a group measuring 1.341-inches.

Ten Crosman Black Widows made a group that measures 1.079-inches between centers. Eight of the 10 BBs are in exactly one-half-inch and almost perfectly centered on the bullseye! Once again, 10 BBs shot with the scope grouped tighter than 5 shot with open sights! 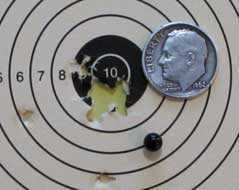 Wow! This was getting good. Next up were Air Venturi Steel BBs. What would they do? in Part 2 five of them went into 2.409-inches at 5 meters.

Today 10 Air Venturi Steel BBs went into 1.886-inches at 5 meters. Once more twice as many BBs went into a much smaller group. I’m starting to see a trend!

Ten Air Venturi Steel BBs went into 1.886-inches at 5 meters. Once again the Buck is more accurate with the scope and bipod.

Next up were Dust Devil frangible BBs. In Part 2 five of them made a 3.233-inch group. With the scope and bipod the Buck was able to put 10 into 2.132-inches at 5 meters. It’s definitely better by quite a lot. 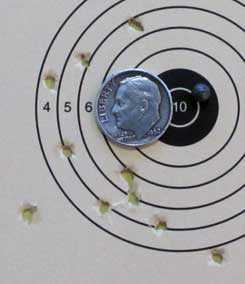 The scoped Buck put 10 Dust Devil BBs into a group that measures 2.132-inches at 5 meters — beating the open sights yet again!

Up last was the Hornady Black Diamond. They were the least accurate in the Buck when I shot with open sights, putting 5 BBs into 4.508-inches at 5 meters. The scope’s good shooting carried over to this BB as well, and the Buck put 10 of them into 2.588-inches at the same 5 meters. It’s still a large group but it’s twice the BBs in almost half the space. 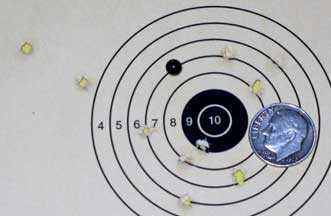 This is probably the biggest advance in accuracy I have seen in many years. There was notable improvement with every single BB shot today.

Yes, it’s just a BB gun and no, the groups are not that small, but when you compare today’s results with those documented in Part 2 it’s amazing!

This scoped Buck would make an ideal grandpa gun for when the little boys and girls come over. Once sighted-in and with the right BBs it makes anyone a sharpshooter.

I want to thank Terry Harman for suggesting this test. This is something I would never have done on my own, and look at how good it turned out! Sure, putting a $108 scope on a $30 BB gun is crazy, but this is one time it really paid off.

How does rifling twist rate affect velocity and/or accuracy? Part 9