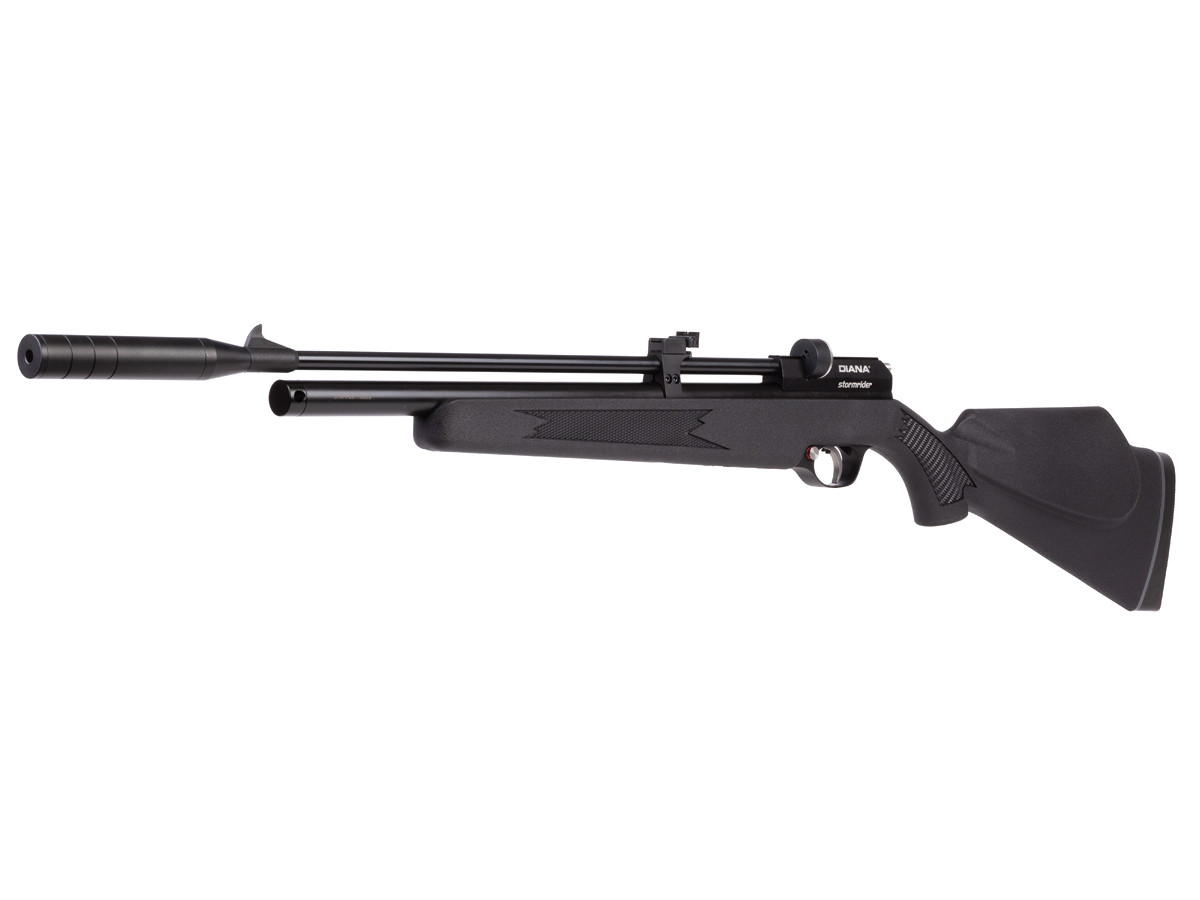 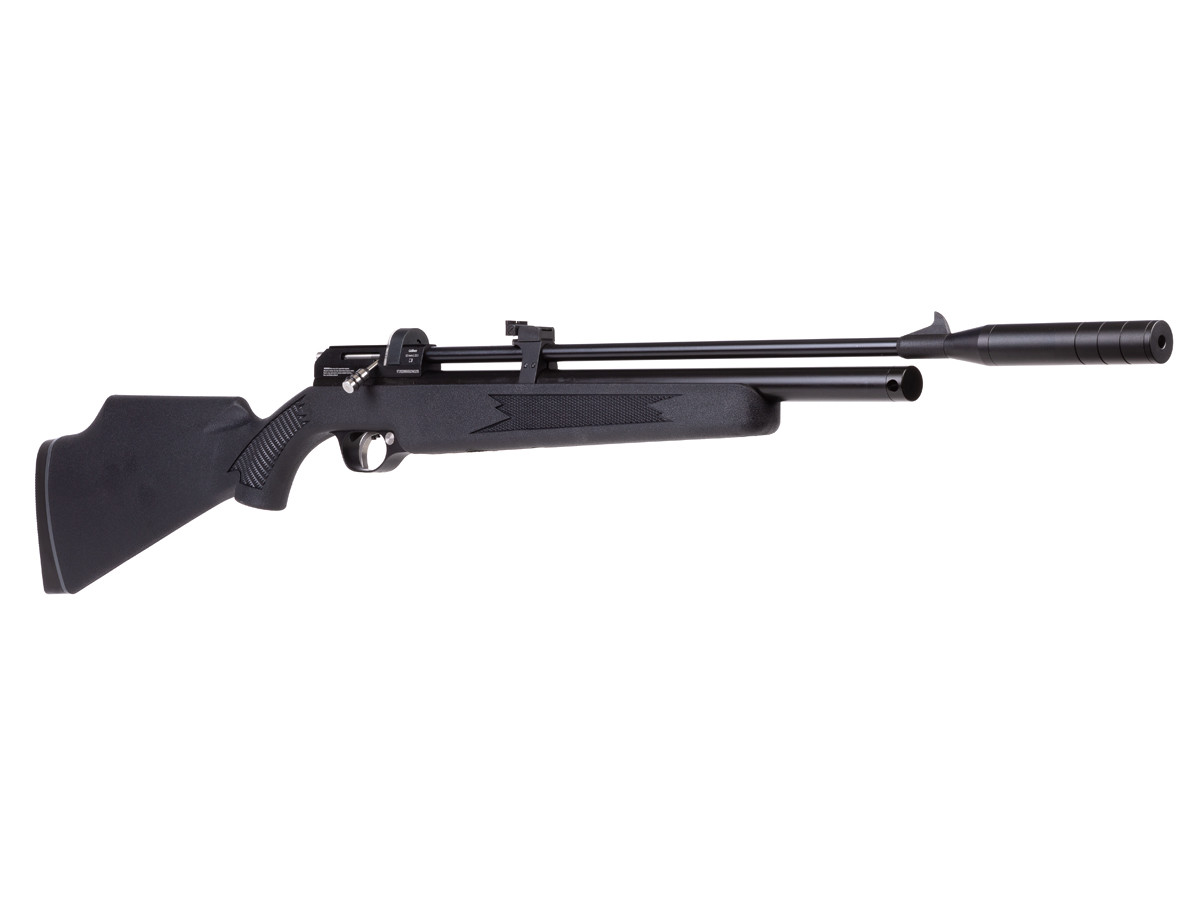 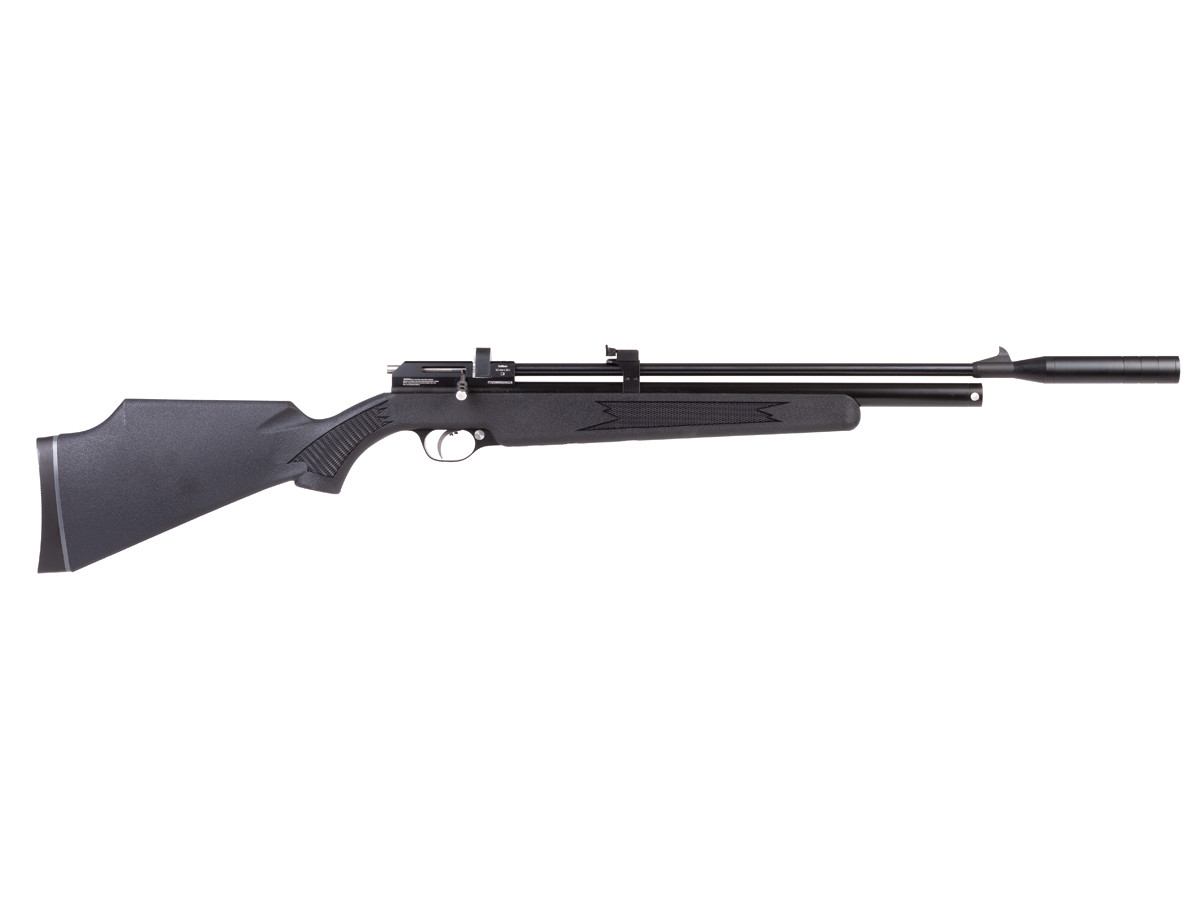 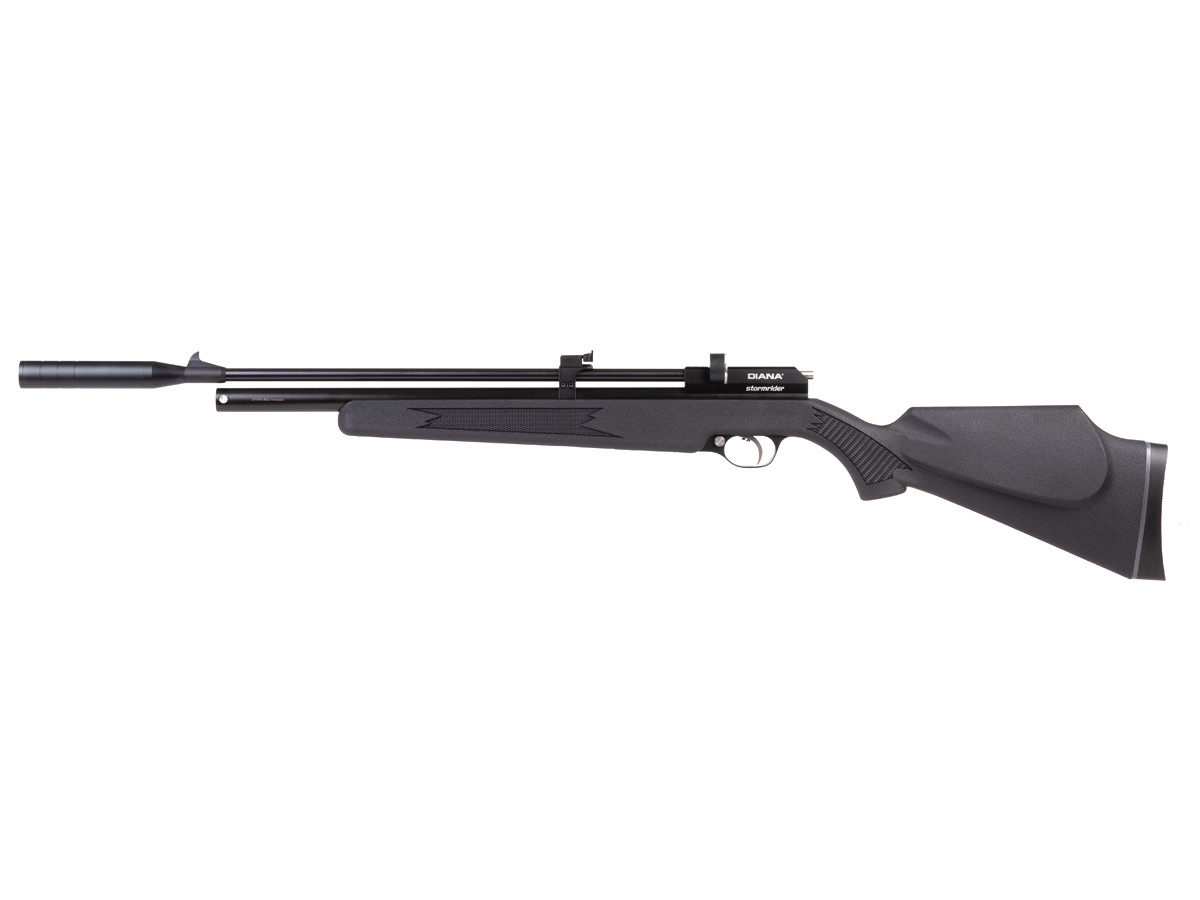 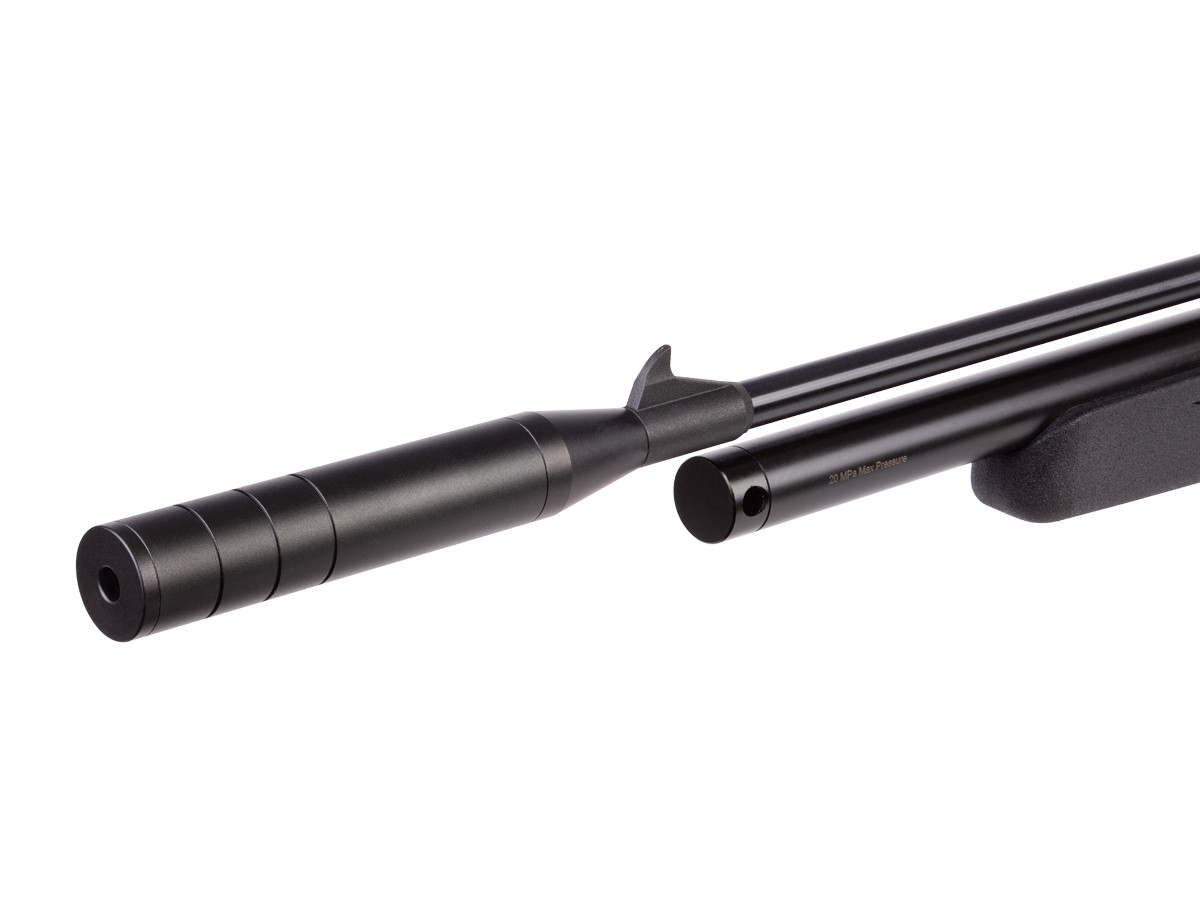 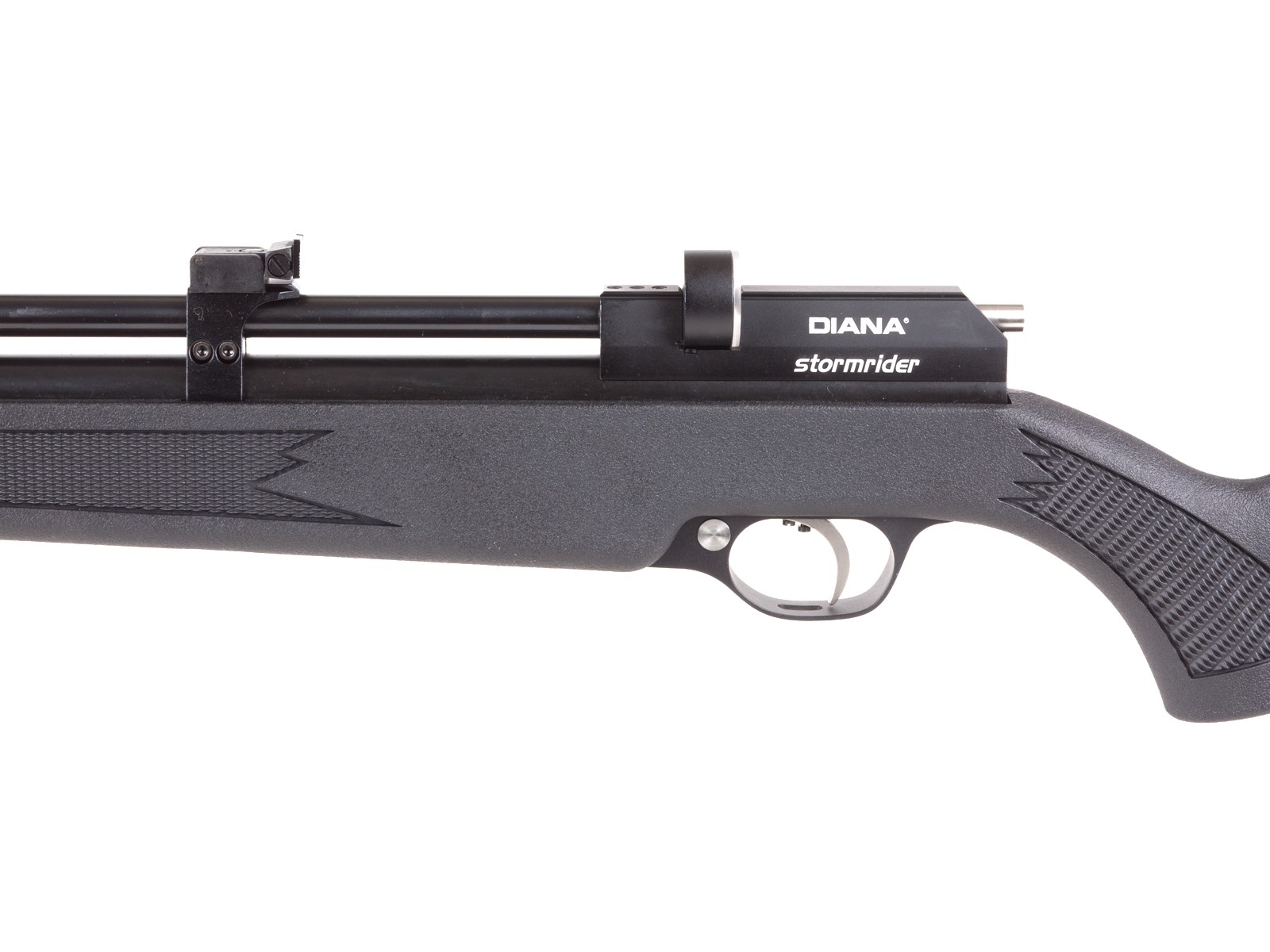 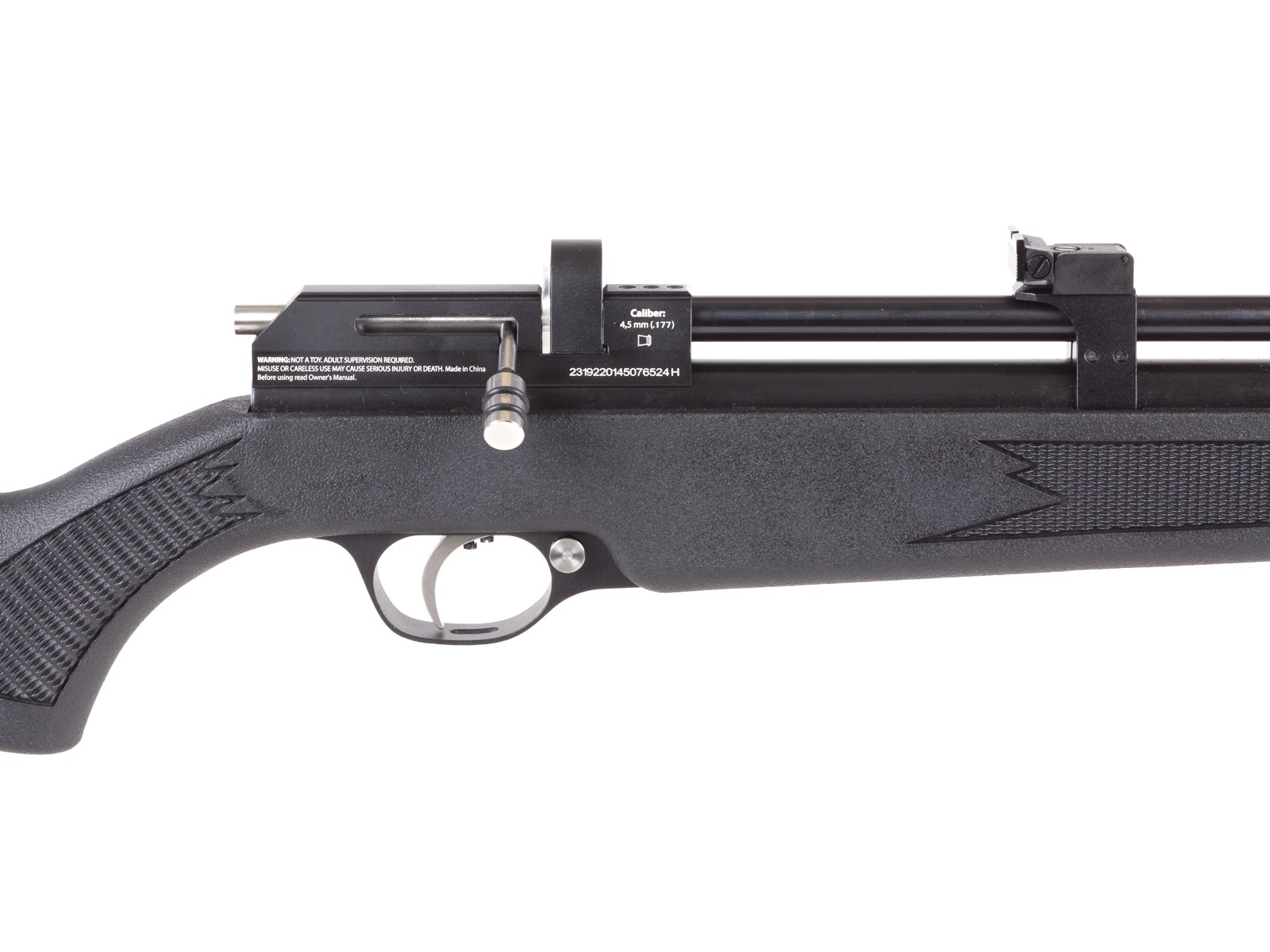 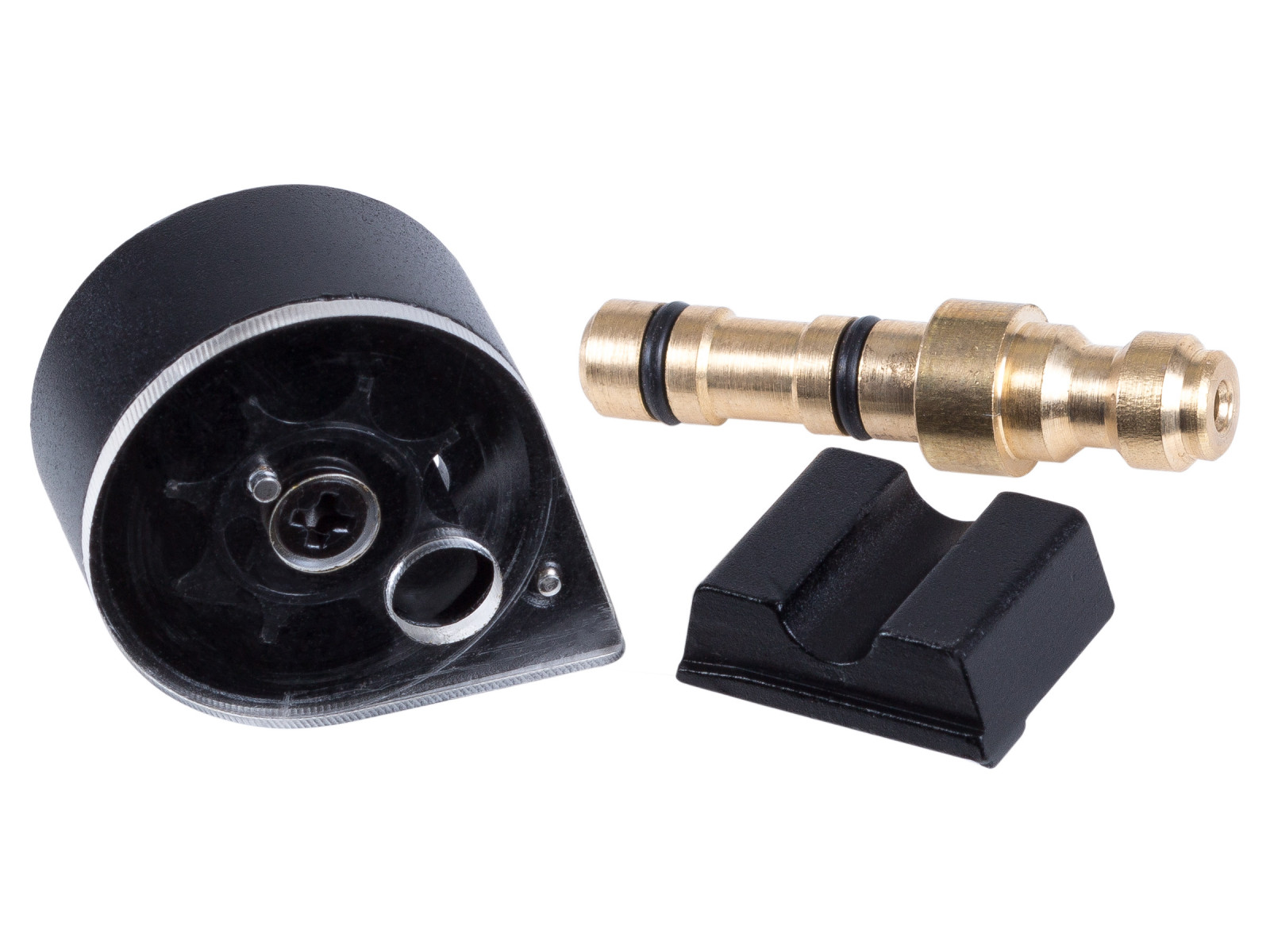 See other products by Diana

With its amazing accuracy, sturdy build and repeating shots, the Stormrider is Diana’s answer to budget-friendly PCPs. The updated, Gen2 version has a longer muzzle brake and a quieter report. It also brings this black, synthetic-stock version for all-weather durability.

This tack driver will provide hours of entertainment with its repeating shots and air cylinder you can fill with a hand pump. You'll get approximately 30-40 shots per fill. The manufacturer reports maximum velocities of 1050 fps and 950 fps (in .177 and .22, respectively) and maximum muzzle energies of 20 fpe in .177 and 26 fpe in .22. So, despite its wallet-friendly price tag, this PCP is fully equipped to handle everything from plinking and target practice to pesting and small game hunting.

See other products by Diana

The price is a given next would have to be the fact it's multi shot and magazine work and are inexpensive to get extra.Ive owned mine for over a year now perhaps more can't remember but it was my second pcp and my first pcp rifle and I ordered a regulated one and it is extremely handpump friendly.I usually have this if I'm hiking and weight is a issue as my handpump weigh nothing but that is usually unnecessary as I get more than enough shots in.a fill.I now have pcps and compressors that I could buy a dozen of these for so to say it was my gateway gun is a understatement.I love the accuracy of course and the trigger witch helps number1 and the weight for shooting of hand and the shot count for such a small cylinder.

If the synthetic version had a pressure gauge on the under side of the stock like the wood I'd buy in a second.Iam sure that they could stiffen the barrel but again cost if I really want to complain a sideleafer action would be nice but again cost all these would change the price point and for everything you get it really is hard to beat.I have competed against much more expensive kits and have blown there minds on what I can get at 40meters oh did I mention mine is the canadian version 500fps.

IF you are interested in airguns either for fun target or practice or pest control and say you don't have the time to practice your hold as yes you can start with a spring gun for less but the practice is the only way you will get results, especially with a budget starter gun.I'd look into this and a hand pump. I just want to say for approx 300 or lil more you have gun 200 unregulated if money is a problem you can add the regulator and fill gauge later easily and you can get a decent starter optic, personally, I recommend a decent scope and rings definitely adjustable objective as that part of the package is going to help with what you get outta this gun

Before the reg, it was good. Perfectly usable but you need to know about the bell curve of velocity and how that effects your POI as you go through your air. After installing the reg, I get like 18 or 19 shots at the same velocity (and same POI, obv,) before it drops off the reg. It is shooting hole on hole at 25 yards. I am using the Crosman 14.3gr Hollows, they've been the best for cycling without hanging up as well as consistent velocity and accuracy. I am shooting them at 830fps which is 22 ft/lbs, Normally I shoot an FX Maverick or a regulated Airforce Talon SS, but I am unbelievably surprised with this rifle for what it is for the price. I have taken quite a few rabbits with this rifle as well as other pests. Perfect backyard hunting rifle, but do be careful as it is pretty powerful!

Add a second factory barrel band in front of the forend. Right now to combat barrel flexing I have ordered a 12mm ID carbon fiber tube which I will fit to the barrel. It will be cut to length, the front site removed (since I am using a scope) and I will tension that carbon fiber on my barrel by screwing in the moderator against it. This will stiffen up my barrel and give me a tensioned barrel, as well as a super cool look! Look out for a video on that soon(ish). I would also change the fill probe out to a standard QD fill nipple. No reason for a modern gun to use a fill probe these days!

If you're just getting into PCP airguns, I can't think of a better and more cost effective way to do it.

Thank you for your comment!
You can get a inexpensive ($16.00) barrel band for the Stormrider at Buck-Rail, which works perfectly. I also have one I got from eBay but haven't had a need for it and it too was cheap at $10.99.
Add comment to this review
April 23, 2022
By David swearingin

Slim size Light weight , points and shoots Well. No problem shooting squirrels out of The trees

This the second one i have bought, Dont have a problem with them , except The bolt. The first one i bought the bolt Broke off when i was cocking it ! They should Up grade the materials for the bolt . I read this is a long time problem with them. Instead of selling replacement bolts. I would Be gald to pay extra five bucks for the fix !! Shame that could be fixed easily at the factory. Instead of selling bolts !

Get a better bolt made before the original Breaks off in your hand . Its hard to drill out Unless you own a machine shop..