Today, we’re going to see how the new Crosman MAR177 upper performs! Because this rifle is a precharged pneumatic, I used my Shooting Chrony Alpha chronograph to analyze the power curve. Though not absolutely necessary, a chronograph can eliminate a lot of shooting time and let you know how the rifle shoots on the first session.

The test rifle was showing a charge of just less than 1,800 psi when I started the velocity test. I chronographed Crosman Premier Super Match target pellets that Crosman sent with the upper for testing the rifle. 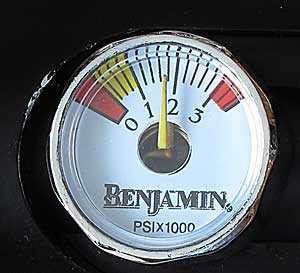 Pressure gauge is located underneath the end of the forearm. This is the pressure that was in the gun as it came from the factory — minus a couple of test shots. It reads just under 1,800 psi.

The first shot went 582 f.p.s., which sounded to me as though it might still be within the power curve. So I fired 16 more shots and the velocity ranged from a low of 559 f.p.s. for the final shot to the 582 f.p.s. that was the first shot. At that point 17 shots had been fired and the pressure gauge was reading 1,600 psi, so I guessed that the gun had fallen off the power curve. The average for these 17 shots was 569 f.p.s.

I filled the reservoir until the gun’s pressure gauge indicated 2,000 psi. I then fired five shots that ranged from a low of 580 f.p.s to a high of 585 f.p.s. It seemed the gun was certainly now on the power curve and that it hadn’t been that far off the curve on the first 17 shots.

To see if these assessments were correct, I filled the rifle to 3,000 psi — the top of the white sector on the onboard pressure gauge. If the gauge was calibrated correctly, the rifle should now be at the top of its power curve. 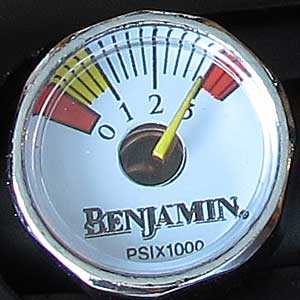 Filled to the top of the white sector, the onboard gauge now reads that 3,000 psi is in the reservoir.

Too much pressure
If you ever needed to see a demonstration of what over-pressurizing a pneumatic gun will do, this is it. The first shot after the fill went out at 549 f.p.s. and the next one went 537. In fact the first 11 shots were all below 550 f.p.s. Shot 12 went out at 551 f.p.s., and the pressure gauge on the gun read 2,900 psi. I accepted that this is the maximum fill pressure for this rifle. More than that shuts the firing valve too fast and costs velocity.

Having established the top fill pressure, I proceeded to test the rifle’s velocity with other pellets without refilling the gun. I tested only target pellets, but the test was more for the weight of the pellets than for their shape.

RWS Hobby
The final pellet I tried was the 7-grain RWS Hobby. They averaged 609 f.p.s., but the velocity spread was larger than the other two pellets. It ranged from 593 to 625 f.p.s. At the average velocity, this pellet generates 5.77 foot-pounds of muzzle energy.

Back to Premier Super Match
After these three pellets had been tested, there were a total of 64 good shots on this fill. Remember — I’m counting the start of the fill from where it passed 550 f.p.s. for the first time. That was when the gun registered 2,900 psi on its gauge. I shot another 10 Crosman Premier Super Match pellets, and this time they averaged 567 f.p.s. The spread went from 559 to 571 f.p.s. At the average velocity, this pellet generates 5.64 foot-pounds of muzzle energy.

How many shots per fill?
I fired 74 good shots on the first fill, and stopped with 2,200 psi remaining in the reservoir. If I continued to shoot until 1,600 psi, as the testing indicates is possible, that would add another 50 shots, minimum, to the shot count, taking the total to 124 shots on a fill. That’s more than enough, but what I now know is that the gun likes the range of 2,900 down to 1,600 psi on the onboard pressure gauge.

The dynamics of the MAR177
The MAR177 is unregulated, so it relies on just the action of the firing valve to control the velocity of the pellet. In the data I’ve shown here, the lowest velocity for a Premier Super Match pellet that’s still on the power curve is 534 f.p.s. The highest velocity within the curve is 585 f.p.s. I’m getting the high velocity from the string fired on the 2,200 psi fill. So, this rifle has a large velocity spread ranging from 534 to 586 f.p.s. to get those 124 shots that I maintain are in the power curve. That’s 52 f.p.s., and normally we wouldn’t consider a range that large to be good. But this rifle is meant for 10-meter target shooting, and for that reason I doubt we will see any group enlargement due to velocity. However, I’ll conduct a test to see if there’s any vertical stringing, which is what large changes in velocity can cause.

If we were shooting the rifle at 25 yards and farther, then I would recommend using a smaller section of the power curve. It’s apparent that, as the air pressure drops below 2,000 f.p.s., the velocity rises to the highest it’s going to be with a particular pellet.

This discussion would be impossible without the use of a chronograph. You would just load the rifle and shoot until the point of impact started to wander. By using the chronograph, you can look at the performance from shot to shot and also understand that there are always going to be some anomalies in the data.

If a different pellet is used to baseline the rifle, things could change dramatically. Premiers are made from a hardened lead alloy, where the other three pellets are closer to pure soft lead. That will have an effect on the numbers you get.

A major lesson demonstrated
This test demonstrates clearly why you cannot simply act as though the pressure gauge on a PCP is reading correctly, and the valve is responding according to the specifications. I’ve said in the past and I’m saying it again — these small gauges can easily be off by 300 psi yet still be considered accurate. The same is true of the firing valve — it may operate at a slightly different range of air pressures than the spec states. If you want to know for sure, you have to use a chronograph.

What we have seen here is the fact that this gun operates on less peak reservoir pressure and also continues to operate to much lower ending pressure. Without these tests, that information would not be known, because you certainly can’t tell from the sound of the discharge. Instead of obeying the owner’s manual in rigid lockstep, we’ve used a diagnostic to learn how our particular gun performs. Knowing that, we can get the best performance that this individual airgun has to offer.

The muzzle compensator
I mentioned the compensator in an earlier report, but I wanted to show it to you here. You’ll see that the turbulent air gets stripped off and cannot follow the pellet downrange after it leaves the muzzle because of how this compensator is designed. 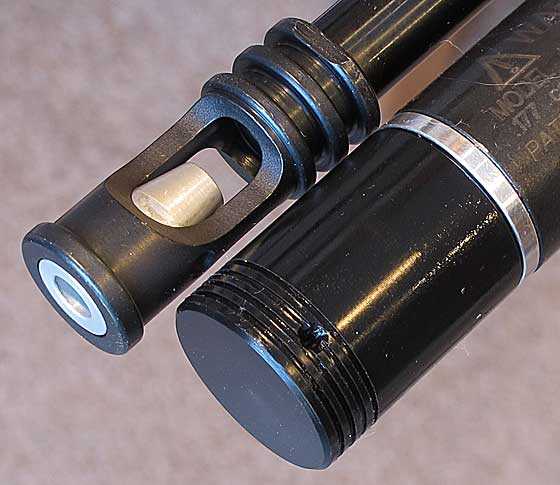 When the pellet leaves the muzzle, it passes through a separate piece that strips off the turbulent air and directs it to the side. The pellet is free to fly straight without the turbulent gasses acting on its skirt. 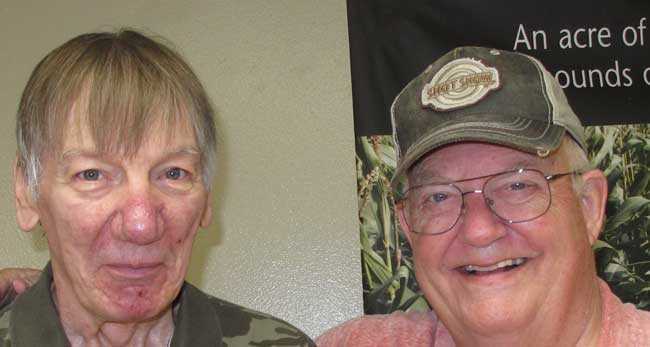