Now that you’ve seen the difference in performance between the factory 12-inch .22-caliber barrel and an optional 24-inch .22-caliber barrel with the standard tank, I’ll have to test both of those barrels with the Micro-Meter tank, so that’s a minimum of two tests for velocity and another test for accuracy. I hope you’ll let me get by with just a single accuracy test (from just one of the two barrel lengths); because after the Micro-Meter tank, I still have to test the rifle using the CO2 adapter with both barrels. Then there’s the new Spin-Loc tank still to be tested. And, yes, the Spin-Loc tank does come as a Micro-Meter tank and as a Hi-Flo tank, as well as the standard Spin-Loc tank. Talk about job security!

New airgunners who read about the Talon SS probably wonder why a Micro-Meter air tank is needed. Doesn’t the SS have adjustable power? Yes, it certainly does. But the stability between shots always falls off (the velocities vary more) when the power is adjusted on the low side. You can see that for yourself by carefully reading Part 2 of this report. And some airgunners shoot a lot more in their houses than they do outdoors. They want the power adjustability that comes with the rifle, but most of the time they’ll be shooting at the exact place on the power curve where the standard tank varies the most. These people are mostly shooting in a basement, attic or garage at 25 feet or 10 meters (33 feet), and the velocity variation doesn’t affect them that much. So, once more the question is: Why the Micro-Meter tank? The answer is that it budgets the air much better than the standard tank, and you get more shots. But that wasn’t why it was created.

I was there when the original idea for the Micro-Meter tank was hatched, though I left AirForce before it became a regular product. Here’s an overview of how it came to be.

The NRA Annual Meeting in Houston, Texas, in 2005 is what brought about the Micro-Meter tank. The NRA has an airgun range at their Annual Meetings and Exhibits where thousands of people can see, watch and even shoot various airguns. The guns have to be controlled because they’re in a public building! They can’t be shooting 1,000-f.p.s. airguns indoors. The pellet traps they bring for the range are satisfactory for lead pellets (lead ONLY, please, because synthetics can damage the traps and ricochet) at muzzle velocities of 600 f.p.s. and under. That turns out to be approximately the velocity of a 10-meter target airgun (both rifle and pistol) but manufacturers want to have their other sporting-type guns on the line, as well. And AirForce was left out altogether, because of the power potential of their guns.

How sad is that? A Texas-based company is excluded from providing airguns for the public to shoot at a show that’s being run in Texas!

Yes, the Talon SS can be adjusted down to below 600 f.p.s., but the problem is that it can also be adjusted the other way. The NRA had to guarantee their insurance carrier that all guns on the airgun range were not capable of shooting faster than 600 f.p.s. The best and really only way to do that is to not put out guns that have the potential of shooting faster. And the Talon SS most certainly does have that potential.

There were only a couple weeks before the show, and we really wanted to put a couple Talon SS rifles on the line. What to do?

We’d been making special valves for guns going to other countries that must have very low velocity, but even then the velocity of those guns was greater than 600 f.p.s. with lightweight wadcutter pellets. But another overseas customer needed a valve that was restricted in a different way for a different reason. So, what we did was make up a special valve that had both forms of restriction — a “double-restricted valve,” so to speak. And it worked! There was no way guns that had air tanks with that valve could shoot faster than 600 f.p.s.

It’s not easy!
For all who think designing a precharged pneumatic valve is straightforward, let me assure you it isn’t. I remember talking to AirForce while they were designing the Edge target rifle and saw the difficulty they had balancing the internal volume of the new target valve with the valve opening size and the return spring strength. You might get a gun to shoot 28 shots at 580 f.p.s. with only 5 f.p.s. variation, but then the velocity drifts up to 675 f.p.s. over the next 40 shots — and after that you’re out of air! Keeping a balance between velocity and shot count is the pneumatic hat-trick — ask anyone who has ever tried to do it.

So we built a few double-restricted valves for the annual NRA meetings, and that was it. They worked fine and gave hundreds of shots on a fill, which made them perfect for a public event like the show. Those guns have been in service ever since and have now been shot by quite a few people and are still going strong. But there was no immediate move to make the valve available to the public.

Several years later, however, AirForce decided to bring out the Micro-Meter tank as an option so everyone wanting an indoor target capability for their Talon or Talon SS could have it. I’ve never tested the Micro-Meter tank for you, except on the Condor back in 2008. So, this test has been waiting a long time.

The Condor was tested on both a high-power setting and a low-power setting. Initially on low power, the rifle had velocities from 829 f.p.s. to 848 f.p.s. over the first 21 shots when shooting the 7.9-grain Crosman Premier pellet. That’s much faster than what we hoped for from this tank, but a Condor has a heavier striker that holds the valve open longer than it was designed to. It also has a 24-inch barrel, which we know is usually more efficient in a pneumatic airgun. A Condor may not give the same performance as a Talon SS when using the same Micro-Meter tank. It also may not give the performance you want for an indoor airgun.

When I switched over to high power for shots 22 through 34, the Condor produced velocities ranging from 733 f.p.s. to 835 f.p.s. This string was fired without refilling the gun, so 21 shots had already been fired before this string started; but notice that the velocity actually dropped, even though the power was set on high. Then, I switched back to low power for shots 35 through 55, not filling the gun before shooting this next string, and the velocity ranged between 795 and 812 f.p.s. There was a lot more to that test, but you get the general gist of it. Pellets went faster on the low power setting! Just the reverse of what the power adjustment wheel normally gives!

I will test the SS with both the factory 12-inch barrel as well as the optional 24-inch barrel, and I think the 24-inch barrel will give me the faster shots. But I want to know whether the Micro-Meter tank is still viable when using a 24-inch barrel on an SS powerplant. And, of course, I’ll give you the total number of shots I get with both barrel lengths.

As for accuracy, I think I’ll test that with the 12-inch barrel, only, since that’s probably the most likely combination an owner will have. I doubt that at short range we’d see anything but stellar accuracy from the 24-inch barrel at 10 meters. Do you?

Too much to test!
Please reread the opening statement of this report. There’s still one more barrel length in .22 caliber and three lengths in each of the three other calibers that the SS can be converted to. And then there’s the regular Talon to test and the Condor to finish testing — in all three barrel lengths and all four calibers! Life isn’t long enough to test them all. But I do want to thank reader new2this for reminding me how much I like the AirForce Airguns. Until he commented, I didn’t realize how much there was. 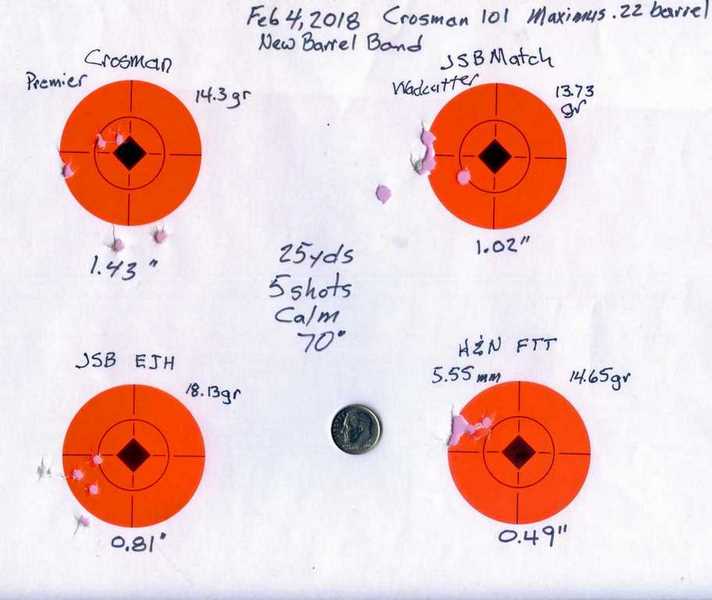