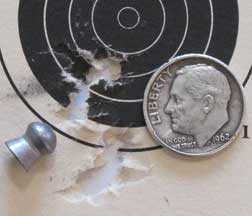 As you may recall, this report now includes the UTG 4-16 Bubble Leveler scope that I am also testing. I mounted it on the gen 2 .25 -caliber Benjamin Marauder rifle because I had my rifle’s action tuned by Tom Himes. The maximum number of good shots on a fill went from 16 to 22-24 and the velocity spread across those magazines dropped to a much smaller number. That means an extra magazine before it’s time to top off again. Tom Himes can be reached at batts@spcracing.com if you want a tune like the one I had. You can read all about it in Parts 8 and 9.

Today we look at the rifle’s accuracy at 50 yards. It shouldn’t be much better than it was in Part 7 because I’m shooting the same JSB Exact Kings I shot then. What’s different today is I may be getting one additional magazine of 8 shots from the rifle after the Himes’ tune. I also mounted the Bubble Leveler scope since Part 7, so we get to see what affect, if any, that had on accuracy. The rifle was already grouping 8 shots in 0.795 and 0.796-inches with this pellet, and I don’t think it can get much better than that.

This was the first time I had the UTG Bubble Leveler scope outdoors and at 50 yards. This was a dark morning, both because of the early hour and also from an overcast winter sky. That was perfect for the test because it showed that the bubble can be seen in low light. In truth the bubble wasn’t that easy to see, but there was i a silvery reflection off it that I could use for positioning, once I learned where it was. I rested the rifle in a long sandbag that made small corrections both easy to make and solid, once made.

I filled the rifle to 3000 psi on the gauge of my carbon fiber air tank which we learned in Part 9 was the right pressure. Now it was time to shoot.

I loaded the first magazine and shot the first target. Eight pellets went into 0.782-inches at 50 yards. Very similar to what they did in Part 7.

From this first target I think we can say that the Bubble Leveler scope isn’t needed for this range and target. That really applies more to the target than the range. That’s because I always align the vertical crosshair with the vertical line of bulls to prevent canting. The Bubble Leveler is good for when there are no other cues to the cant of the rifle. I need to devise a test for that.

Okay, the first target told me the rifle was performing on par and as expected. This second test would tell me if it continued to do its best. In test 2 eight JSB Exact King pellets went into 0.984-inches at 50 yards. That’s about an inch. So it’s larger than the first group, but not by much. 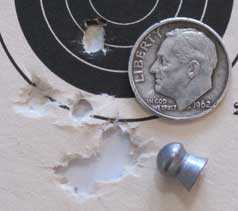 The second magazine put 8 JSB Exact King pellets in 0.984-inches at 50 yards. It’s a larger group, but still very credible. And the point of impact is almost exactly identical to where the first magazine hit.

The third magazine will be the telling one, because up to this point the rifle was only good for 16 shots per fill. Let’s see how it did.

The third target was very telling. The first 5 shots were right there with the first two magazines. Shots 6 and 7 dropped a little below the others and the final shot dropped almost 3 inches from the first 5. The rifle is definitely off the power curve on that shot! The group from the third magazine measures 3.332-inches between centers, with most of that attributable to the final shot. 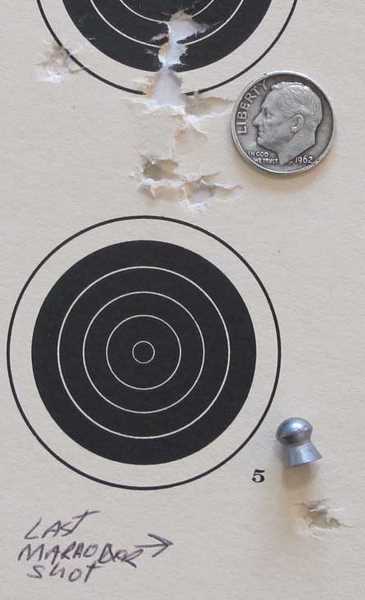 The third magazine started well but finished off the power curve. Shots 6 and 7 dropped a little and shot 8 plummeted well below the others.

What did we learn?

So far we have learned there are more than 16 good shots in a .25-caliber Gen 3 Marauder when it is expertly adjusted. There might even be a full 24 shots if I fill the rifle to about 3050 psi at the start. But I am safest if I limit my magazines to just two between fills when I want to shoot accurately at 50 yards and beyond. Shooting to 35 yards is a lot less demanding than pushing out to 50 yards, and that is a function of the physics of shooting any pellet rifle more than which brand of pellet rifle you shoot.

As I went back through all the reports in this series on this rifle I found that the accuracy has not changed one bit. This rifle consistently groups 8 shots under one inch at 50 yards, and has been doing so all along. However, there might be something that is new — I just have to test it. The rifle might now group better at 100 yards, because it is so consistent in velocity and also because of the Bubble Leveler scope.

So, I’m going back to the 100 yard range next. I want to see if precisely leveling the rifle will have any bearing of the group size. And I have past test data to compare to. Stay tuned!

I put this last because the video take a while to load. It is there, so give it some time and it should load to your page.If it doesn’t load, refresh your page and it should appear.  Also, if you enlarge it to fill your screen, you can see it better.